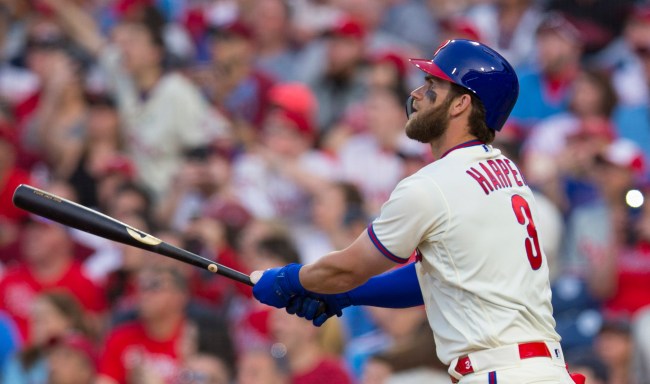 As of this writing, Bryce Harper has played 930 games in a Major League Baseball uniform. But he has never appeared in a uniform other than that of the Washington Nationals while playing a game in Nationals Park.

That all changes on Tuesday night.

After Washington drafted him when he was just 17-years-old in 2010, Nationals fans are now faced with their franchise player playing against them when Harper steps in to face Max Scherzer in the first game of a two-game set on Tuesday night for his new team, the Philadelphia Phillies.

On Tuesday morning, in anticipation of the unusual circumstances he will be facing in the evening, Harper penned a lengthy Instagram post thanking the Nationals, their employees and their fans.

“If you would have told me 5 years ago I would be walking into Nationals Park as an opposing player, I would’ve told you that you were crazy. Five years later, I’m doing just that,” Harper wrote. “I remember the first day I walked into Nats Park. My first base hit. My first home run. And, of course, my first standing ovation. Nationals fans delivered that first ovation.

“The things that I will miss most are the relationships I gained on a personal level with so many of the Nationals staff and workers around the ballpark. Every day I walked in, I got a smile or shared a laugh with you.

“I especially want to thank The Lerner Family and Mike Rizzo for the unwavering support they showed me during my tenure in DC. The city of DC was home. Filomena’s, The Silver Diner, The Italian store, and countless other places helped make it feel like home. You, Nationals fans, made me one of your own for the entire time I was a part of the Nationals organization. I’m so blessed to have been able to play for a fan base that cared so much about our team each and every night. You will always hold a special place in my heart no matter what.

“I look forward to continuing Harpers Heroes with LLS in the DMV as well as making sure the legacy fields bearing my name are the best youth fields in town!

“When I run on the field tonight I am sure to hear some boos, but I will always remember the cheers and the screams that are still with me right now, as I start my new chapter. So for that, DC, THANK YOU.”

Of course some fans will boo Harper Tuesday night, because, fans, but how many of them who boo would turn down an offer of a guaranteed $330 million for 13 years of work?