Bryce Harper Has A Very Cool Reason Why He Chose To Wear No. 3 And Not No. 34 For The Phillies 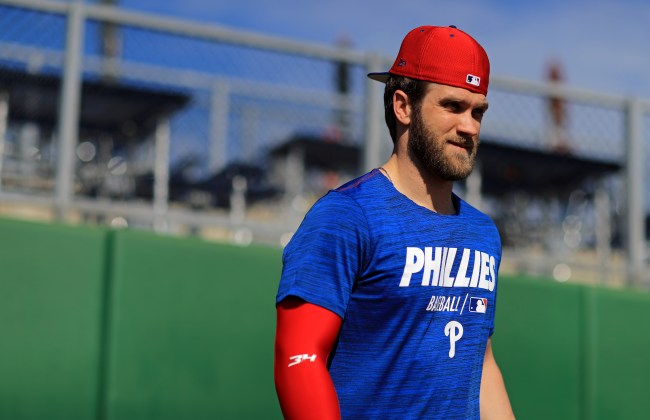 Bryce Harper is a very rich 26-year-old who is now destined to spend the next 13 years of his MLB career in the City of Brotherly Love playing for the Philadelphia Phillies. While the 2015 NL Most Valuable Player has 330 reasons why he should walk into his new clubhouse and say and do anything he wants to, the outfielder decided to do something really cool to show his new franchise — and its fans — that he knows a little bit about their rich history.

That’s because, during his introductory press conference with the Phillies yesterday at the team’s spring training facility, Bryce Harper unveiled his new jersey that, to the surprise of many, didn’t have his normal No. 34 on the back of it. For those who don’t know, Harper is a huge Mickey Mantle fan — who wore No. 7 — and, because he wasn’t able to get that jersey number in the minors, he decided to go with 34 because 3+ 4 = 7. Makes perfect sense, right?

Well, now Bryce Harper is trying something totally different, deciding to just wear No. 3 for the Phillies because, in his mind, the No. 34 was, and always will be, recent Hall of Fame inductee Roy Halladay’s digits in Philadelphia. Here’s what Harper had to say about his decision to honor the late, great Halladay, who passed away in 2017 from a tragic airplane crash prior to his Cooperstown induction.

“I thought Roy Halladay should be the last one to wear it. He’s somebody in this game that’s greater than a lot of guys who ever played it. A Hall of Famer. Somebody who played the game the right way, was a great person, and was one of the nicest people I’ve ever met…. For me, it’s Roy Halladay.”

That’s pretty awesome of Bryce Harper to do since, you know, there’s nobody who would have batted an eye had he claimed the number for himself during the rest of his Phillies career. So kudos to the kid for doing something special and getting off on the right foot with his new teammates and city.

As for remembering that he’s now in Philadelphia and no longer playing in D.C. for the Washington Nationals? Well, that’s a little something different, because Harper had a little brainfart while answering questions. Take a look at what he accidentally said.

Cost to bring Bryce Harper to your team:

Bryce saying he “wants to bring a title back to DC” at the Phillies introductory press conference?

Oops, we’re going to have to work on that one, bro. But, hey, it’s all brand new for Bryce Harper, so he’s still adapting. Something tells me he’ll be just fine once he does — no matter what number he decided to wear with the Phillies.