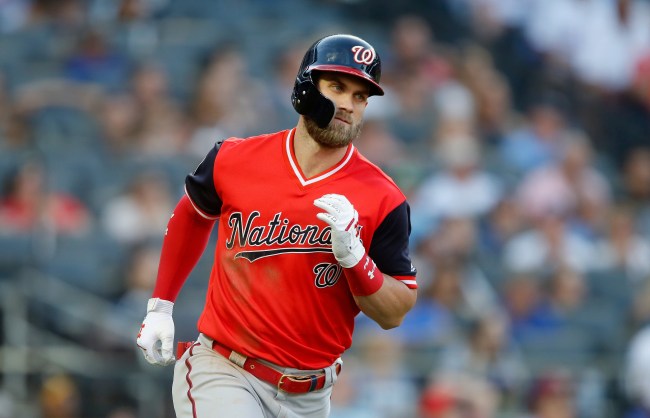 Bryce Harper finally has a new home, agreeing to an absurd 13-year, $330 million deal with the Philadelphia Phillies that doesn’t include any opt-outs, per Jeff Passan of ESPN. That means that Harper, the 2015 NL Most Valuable Player, will be in Philly until he’s 39 years old, unless the team decides to trade or release him for some reason prior to that.

The extra-long term in Bryce Harper’s 13-year, $330M deal not only ties him to Philadelphia until he’s on the cusp of 40 but was important to Phillies for CBT purposes. The luxury-tax number will be just over $25M, a friendly number for a star player. Gives Phillies flexibility.

The Phillies were long-rumored to be the frontrunners for Bryce Harper from the jump, but negotiations continued to carry on through the start of Spring Training and nearly into March for some reason. Whether it was for Bryce Harper and his camp to weigh the best offer from the best team, or playing their bargaining chips as other All-Stars like Manny Machado and Nolan Arenado got inked to big-time deals, we’ll never know. All we do know is that the Phillies just secured the biggest free-agent in MLB history today, and gave him a ton of cash to make Harper its next franchise superstar. Plus, it keeps Harper in the NL East, which means he’ll be seeing his former club, the Washington Nationals, a bunch of times over the course of this deal.

As for the breakdown of Bryce Harper’s deal, with the $330 million stretched over the next 13 years, he’ll average an annual salary of $25.38 million, which isn’t the highest in a season. However, the $330 million total over the lifetime of the contract is the richest in MLB history, surpassing the aforementioned Machado’s $300 million from the San Diego Padres just a few weeks ago.

Naturally, given the starpower of Bryce Harper and the crazy amount of dollars he just got, the Internet had tons of reactions. Here are some of the things people on Twitter are saying about the deal.

Until he realizes he’s stuck in Philly

Committed to never winning a championship I see

Bryce Harper at the start of his 13 year deal with the Phillies and at the end… pic.twitter.com/btF3PlH6S6

I’m going to get married and have at least two children and then Bryce Harper will still have several years left on his Phillies contract. Wild. pic.twitter.com/m4oZRWDNny

Considering the Philadlephia Phillies haven’t reached the postseason since the 2011 season, Bryce Harper has his work cut out for him to make them contenders again. But, hey, in 13 years, something tells me he’ll be able to figure it out and right that ship somehow.