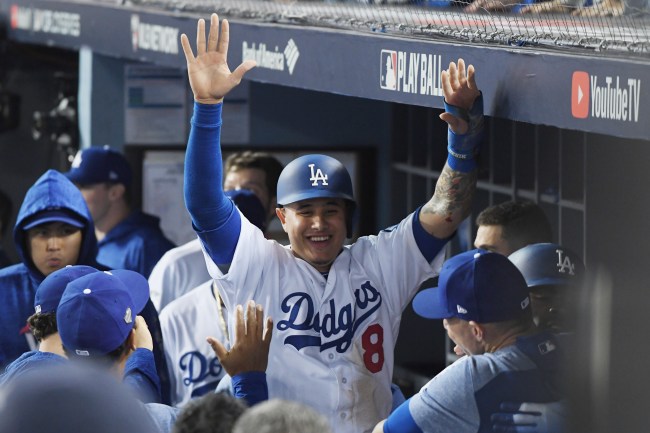 Manny Machado was floating around MLB’s free agent market forever, but the long wait was well worth it. That’s because, per sources, the All-Star third baseman just inked the single most lucrative free agent contract in American sports history, signing with the San Diego Padres for 10 years and $300 million.

Manny Machado's deal, as @Feinsand first reported, is for 10 years and $300 million with an opt-out after the fifth season.

And now every eye in baseball turns to Bryce Harper. His move.

As Jeff Passan of ESPN tweeted out, Manny Machado can opt out of the deal in five years — which, assuming he wants even more cash, he’ll probably do — but, if he honors the full decade-long contract, is guaranteed the $300 million. Looks like the strategy to wait until after spring training started worked out well for Machado, so we’ll have to see if fellow superstar free agent Bryce Harper earns something similar when he finally signs.

While reports from MLB sources have said that the Manny Machado deal is done, Dennis Lin, the executive chairman of the San Diego Padres, seems to be pumping the breaks, saying that there’s no deal in place quite yet, but that the two sides are continuing conversations. According to longtime baseball writer Ken Rosenthal, though, that’s just a matter of semantics, as he tweeted this out in reply to the news of Lin’s comments.

This likely is semantics. Machado has not passed a physical and the two sides have not finalized language. But they are in agreement on financial terms. https://t.co/j4kcZZBRg1

Machado, who split time between the Baltimore Orioles and Los Angeles Dodgers last year, hit a combined .297 with 37 home runs and 107 RBI. For his career, the 26-year-old is a four-time All-Star selection and a lifetime .282 hitter, with 175 homers and 513 RBI. While productive, he has made headlines for openly talking about his lack of hustle during last year’s World Series, and hasn’t been a franchise difference maker, so some people on Twitter were critical of the Padres’ decision to give Manny Machado so much cash.

That’s not the guy I would give the single biggest contract in sports history to.

By a small market franchise. Nonsensical.

Young age doesn't mean much if you've already been in the league since you were barely 20. They will most definitely regret this.

Johnny No Hustle aka Manny Machado shows that he doesn't care about a ring or playing in front of a crowd. It was simply all about the…. pic.twitter.com/9K9SzLjCd3

Pretty sure you could buy the Padres for $300 million

Wow, so after all of the holding out, someone finally said screw it and overpaid. Thought we were about to see MLB teams wisen up & a much needed market correction. But nope.

I'm guessing the Padres hope he ops out after year 5.

With Manny Machado now off the market and getting his money, it’ll be interesting to see what the aforementioned Bryce Harper does. Both players seemed to be waiting for the other to sign and “set the market,” so to speak, so will Machado’s record-breaking free agent deal be smashed in a couple days by Harper, the one-time NL MVP? Quite possibly — but, given that Machado’s got 300 million reasons why he should be happy, I doubt he’ll care if he loses that distinction to Harper, ’cause dude is filthy rich now.