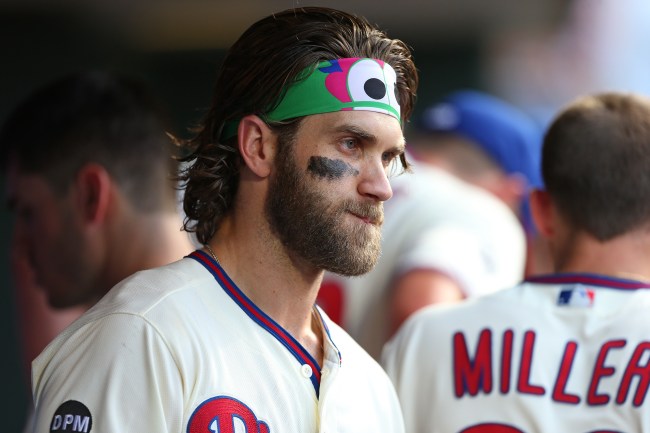 You ever break up with a girl and in the midst of a crippling cold streak go to her Facebook page and find out she just got engaged to a Medal of Honor recipient or some shit?

That is essentially Bryce Harper right now, as he can only watch his former team make its first World Series appearance in 86 years exactly 20 minutes after he bailed for Philadelphia. Oh yeah, and to add insult to injury, the Nationals were gifted the honor of officially eliminating the Phillies from playoff contention a month ago. Gulp.

Harper spoke with Jayson Stark of The Athletic about his take on his former team reaching a point he failed to lift them to in seven seasons.

“I think it’s about being able to be the person that I am and not saying to myself, ‘Oh my gosh, I can’t believe I’m not a National.’ Or, ‘Oh my gosh, those guys are doing what they’re doing. I can’t believe it. I’m so jealous. No. I’m so happy for them. You know how hard it is to get into the postseason and win games. For them to be able to put it together this year the way they have, it’s an amazing thing.”

“I made my decision, and that was my decision,” Harper said. “And it was the final decision that I made. You know, jealousy isn’t good. For me, it’s about having the gratitude to go out and do what I do each day and not having an attitude toward anybody else.”

Harper claims that the Nats made savvy moves to bolster their pitching arsenal after he left, adding Patrick Corbin and Anibal Sanchez to the rotation.

As for whether or not the 13-year, $330 million man will subject himself to watching his ex battle for baseball’s biggest prize, Harper is putting his fan cap on (at least for the public).

Meanwhile, Bryce back at his mansion minutes before the first pitch is thrown in the World Series: