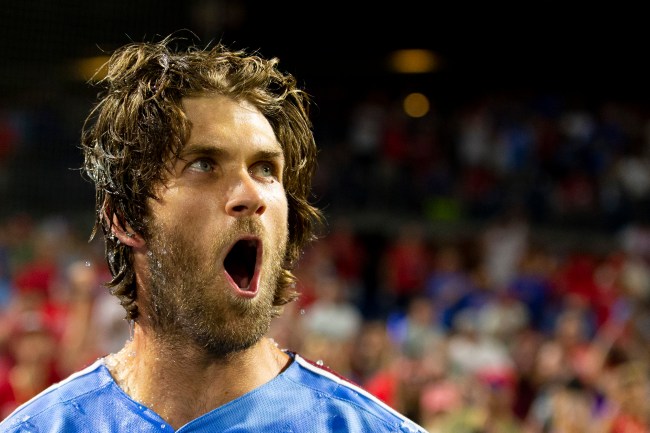 Bryce Harper made the jump from the Washington Nationals to division rival Philadelphia Phillies this past offseason, signing a 13-year contract worth $330 MILLION. That’s an almost unfathomable sum of money and with it comes to the responsibility that Bryce Harper would show up and help the Phillies make the playoffs and win another World Series.

The Phillies are 8-games back in the NL East behind the Braves in 1st and the Nationals who are 2.5 games ahead but Philadelphia has strung together three wins in a row and Bryce Harper earned his paycheck last night when he rocketed a walk-off grand slam into the third deck and absolutely destroyed the souls of Cubs nation.

The Cubs are tied with St. Louis for the NL Central with the Brewers trailing closely and only one game behind. But the Cubs are slumping at the moment with a 3-game losing streak and 4-6 in their last 10. They were hoping to gain some momentum last night in Philadelphia but they instead came up against Bryce Harper at his best. 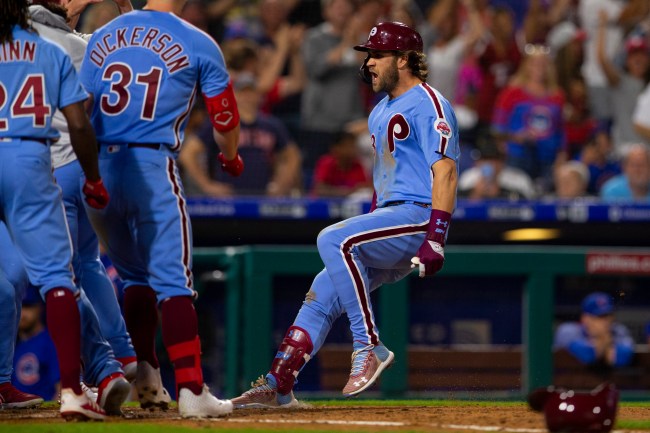 Chicago was leading 5-1 going into the bottom of the 9th, a pretty comfortable lead. But the bases were juiced for Bryce Harper and the stars aligned. It’s hard to say what the best part about this series of events was but I’m partial to Bryce sprinting at top speed around the bags before getting demolished by his teammates at home plate. His wife’s reaction was also pretty great.

Bryce Harper’s wife, Kayla, had a pretty similar reaction to every Bryce Harper fan out there:

Never have I ever seen him do this grinch like sprint but it’s a vibe I never knew I needed. https://t.co/kIYo3kcT9r

ESPN caught Bryce Harper after the game to ask him about the experience and it sounded like he was just as blown away as the rest of us:

Harper added of his walk-off shot: “Besides winning the division and getting to the playoffs, that was one of the coolest moments I’ve ever had in my life.” (via)

His parents weren’t even there to see the action! How do you walk away from that situation?!

Bryce’s parents didn’t even stay for the walk-off? smh. pic.twitter.com/HmuyqqxYjt

If it sounds like I’m stanning hard for Bryce Harper it’s because I am. I’m not a Phillies or Nats fan, I’m actually a Rays fan, but I’ve had Bryce Harper in my Fantasy Baseball keeper league for 3 or 4 years now and I love everything about this man and how he’s helped me make the fantasy playoffs every single year and recently win the league.

Lastly, I have to include this:

I’ll never be able to move past Bryce Harper’s pronunciation of ‘meme’. I think about this all the time.