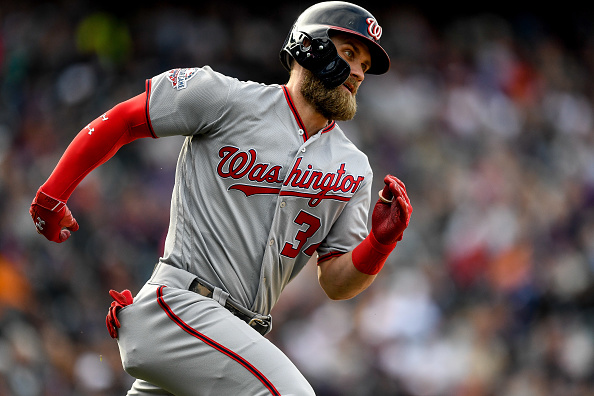 Before Bryce Hrper became a free agent this offseason The Washington Nationals reportedly offered him the biggest contract in the history of the four major sports which he instantly turned down.

Nationals’ offer to Bryce Harper was roughly $300 million for 10 years — so an AAV of $30 million — according to multiple people familiar with it. No opt outs.

Keep in mind, this would be the biggest free agent deal by total money paid in the history of the four major sports. https://t.co/usq54BAvAt

Also keep in mind, this is $100 million (or more) below where Scott Boras will likely set his initial asking price. Harper is one of the youngest and most decorated free agents he will ever represent. He was always going to shoot high. https://t.co/W6FeyAqbwE

“We’ve had conversations and we utilized our exclusivity to negotiate with him late in the season through when he became eligible to sign with a team,” Rizzo said. “We didn’t get anything done, but he’s a guy that is near and dear to us and we are not closing any doors.”

Now that the Nationals are out of the picture there’s a good chance he signs with the Yankees.

Source: The Yankees have expressed interest in Bryce Harper as a first baseman. They have reached out to Nationals execs about his makeup and willingness to move positions. Aren’t completely sold on Voit (“could be a September fluke”), lost a lot of hope in Bird

Fans were flabbergasted that Harper would turn down such a big contract cosndiering he had a relatively down season.

So 30 mil a year starting offer… ? If you want to play somewhere .. what else do you want?? Highest paid player … I think he may want to be on West Coast

No player in s worth even close to that! Will not translate to wins!!!!

And he turned it down????? He must not want to be there anymore cause he wont get more than that.