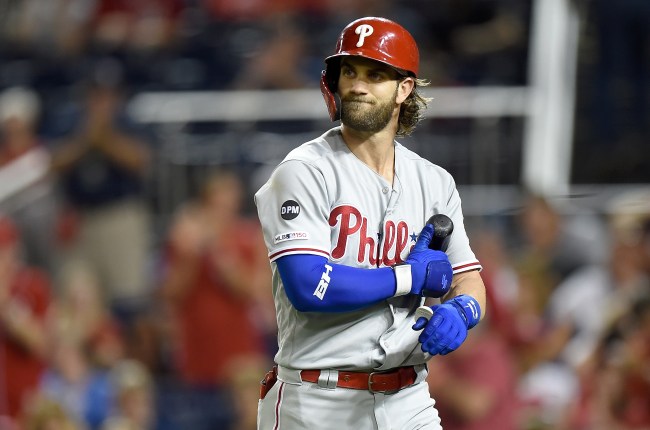 The Washington Nationals officially eliminated Bryce Harper and the Phillies from playoff contention in a 5-2 victory at Nationals Park Wednesday, marking the Phillies fifth straight loss. Oh yes, and the Nats clinched a Wild Card berth Tuesday with a doubleheader win for an extra twist of the knife.

“It was wonderful to eliminate him here in our park,” Nationals general manager Mike Rizzo said following the game.

While Harper had nothing but good things to say about his former team after the game, he did see to it to call out some Nationals fans who he believed crossed the line in their trash talking in the eighth inning.

“They were fine all game, talking about myself and things like that,” Harper said. “I get it everywhere I go. That’s nothing new. But the last two innings, it’s just not right. It’s not right.”

“I’ve got 60,000 fans up in Philly that appreciate me as a player, appreciate me as an individual and my family, as well,” Harper said. “I owe a lot to those people up there in Philly because they show up for me every single night and they’re there to cheer us on and boo us and keep us going as a team and as individuals as well.”

Harper’s wife, Kayla, then revealed on Twitter that Washington fans resorted to saying some aggressive things about their four-week-old son, Krew.

When you bring his son or family into it, yes you’re crossing a line. Stick to your overused overrated and Harper sucks chants if you’re really that loser that goes to a game to heckle someone. Phillies fans might boo him but they don’t bring his 4 week old son into it. Classless https://t.co/NVj3ixyrPY

Wasn’t one guy. It’s been going on all season.

I truly doubt you are aware of the dms I have gotten from nats fans all season. Wishing my son has autism when he’s born for example. So yes all season.

My one hope for myself is that my life doesn’t get shitty enough to wish a developmental disorder on someone’s son because he made a business decision I don’t agree with. I wouldn’t consider myself a good person necessarily, but I still hold on to faint shreds of human decency.

Plus, it’s just a WIDDLE BABY!