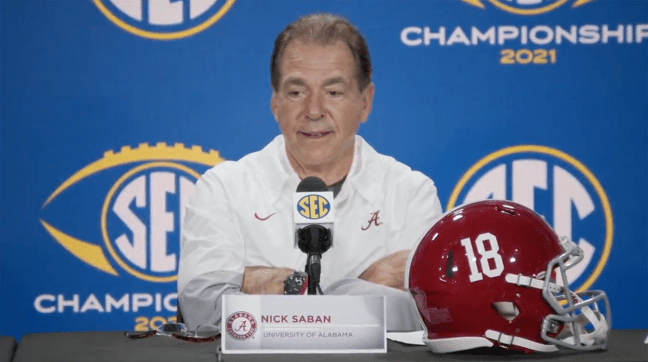 Nick Saban has long been vocal about how he feels about the media. The 60-year-old head coach of Alabama football has trained his team to drown out the noise and consistently uses the term “rat poison.”

Rat poison refers to the frequent adulation of his players and teams, which he believes could potentially impact his team in a negative way. He is often short in his responses regarding executive decisions, never allows slander toward his players, and is not interested in entertaining ludicrous questions.

However, he also uses the rat poison as bulletin board material. Take this week for example.

Alabama entered the SEC Championship as underdogs and then went on to win the game 41-24. After the win, which guaranteed the Tide a spot in the College Football Playoff, Saban addressed the media in hilarious fashion.

He went so far as to say that this week’s rat poison was yummy— cracking himself up in the process. He and his team fed off of the negativity.

Nobody can make the word “yummy” sound threatening like Nick Saban.

“The rat poison you put out there this week was yummy.”

As Saban went to wrap up the postgame press conference, he took a moment to thank the media. Not jokingly, but genuinely. Well, perhaps there was a bit of tongue-in-cheek attitude to his gratefulness.

Meanwhile, also sitting at the podium, quarterback Bryce Young couldn’t manage to hold back a laugh.

Young’s face while his head coach, who has been so openly anti-media, thanked the media is priceless.