Bryce Young Flexed On Everybody By Showing Up To SEC Media Days Rocking $1,100 Shoes 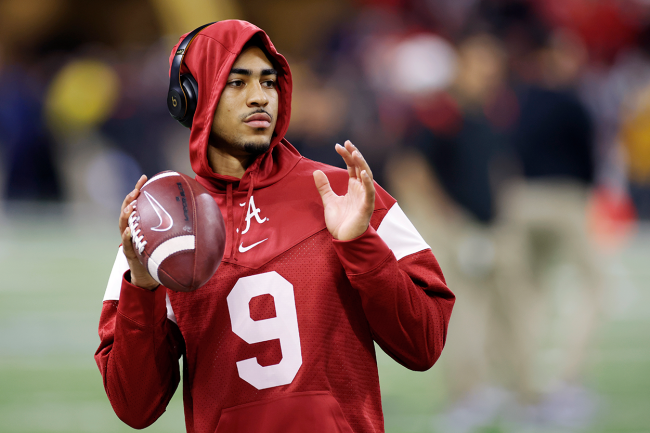 Bryce Young is only 20 years old, but the reigning Heisman Trophy winner is already worth a large amount more than the average American in terms of financial status. The Alabama Crimson Tide quarterback has an estimated NIL valuation of $1.9 million according to On3 Sports and has signed deals worth at least $1 million in total.

Needless to say, his bank account is doing just fine.

As the SEC Media Days get underway from the College Football Hall of Fame in Atlanta this week, Young was invited to represent his program in front of the media. It was not a surprise to anyone, being the incumbent signal-caller coming off of a year that led him to be named the best player in the sport.

A large part of Media Days is the drip. Coaches and players alike show up to the event wearing their finest looks— all the way down to the shoes.

On Monday, Lane Kiffin asked the question of why people still wear ties while showing off his fire shoe game. In response, Missouri head coach Eli Drinkwitz chirped back and flexed his kicks.

On Tuesday, Young took things up a notch. While Kiffin and Drinkwitz were wearing Nike/Jordan, the Alabama quarterback rolled up in Christian Louboutins.

Young’s shoes were custom, so they may have cost even more. But going off of the brand’s website, they weren’t cheap.

Here is how they are described on the website:

“The contemporary lines of the Seavaste 2 Orlato sneaker are set on a rubber sole. This timeless model is dressed in silver calfskin. It is enhanced on the toe and back with signature spikes, an illustration of Maison Christian Louboutin creativity. Its grosgrain finishes give this shoe a refined allure.”

No matter how much they cost or how they’re designed, Young’s shoes were fresh!