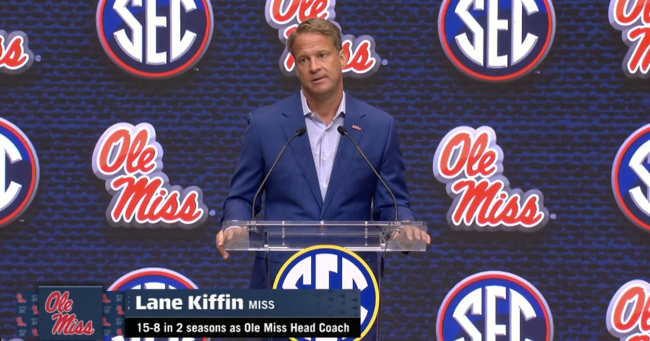 Lane Kiffin showed up to SEC Media Days in a suit. But he did not have a tie.

On his feet, Kiffin came through drippin’. The 46-year-old, who is known for his shoe game, was rocking a pair of custom Nike kicks with ‘Lane Train’ socks.

Or, in this case, the SEC commissioner.

While discussing how Ole Miss has put such a significant emphasis on the visual and social media element to recruiting, Kiffin said that he and his staff “doesn’t think outside of the box,” but “creates a new box.” He then went on to tell a story about his decision not to wear a tie.

Prior to taking the podium, Kiffin said that SEC commissioner Greg Sankey was jealous of his decision not to wear a tie. He asked why people still wear ties and wondered if it was simply because that’s what people have always done.

We don't think outside the box, we just create a new box. pic.twitter.com/nTklQV7PJO

Kiffin raises a great point. Why do people wear ties?

Well, we have the answer. And, as it would turn out, Kiffin is basically right about why people still wear ties. It comes down to tradition.

So then who will be the first to break that tradition? Within the SEC, that appears to be Kiffin, which should come as no surprise to anyone.