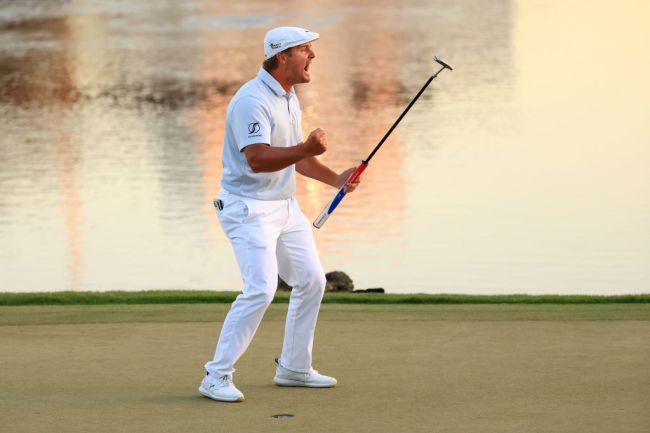 Even if you’re not a golf fan, it’s been hard to miss the headlines out of Bay Hill this weekend. Bryson DeChambeau’s quest to break golf with his protein shake-fueled power continued to the Arnold Palmer Invitational as he attempted to drive the a Par-5 sixth and went on to win the event. The hole lies 555 yards from tee to green and requires a direct line of approximately 340 yards over a massive pond.

Wind conditions had to be perfect for him to attempt the feat, which would allot him the opportunity to putt for an albatross. Whether you like DeChambeau or not, it was must-see TV. He is a drug I cannot quit.

"If it's not into the wind, I can get there."@B_DeChambeau tried driving the green on a 555-yard par-5. pic.twitter.com/3vtpeL3btH

The stars did not align when the 6-foot-1, 240(ish)-pounder stepped up to the tee during the first and second rounds, but he still crushed it.

The wind shifted before Bryson teed off on No. 6 today. He didn’t attempt the direct line but still went nearly 350 yards. pic.twitter.com/IPT9rhF5tV

However, once Saturday and Sunday rolled around, it was go-time. DeChambeau’s third round drive didn’t reach the green but his 370-yard bomb was one of the most electric moments in golf history. He stepped up to the tee, obliterated the ball and threw his hands up in a manner reminiscent of Russell Crow in Gladiator. ARE YOU NOT ENTERTAINED?!

The 27-year-old went even bigger during the final round, though his showmanship was not quite as exciting. DeChambeau’s drive went 377 yards and sent the fans into an uproar.

#APINV UPDATE: HE DID IT AGAIN!

While his effort on No. 6 was the biggest storyline, DeChambeau had a few crucial shots that lead to his victorious weekend. Stuck in the deep rough on No. 9, he went full-send to land on the green. His style is unconventional and he isn’t particularly likable off of the course, but you can’t look away.

What even is Bryson DeChambeau… pic.twitter.com/0AOdpPSuIS

Two holes later, DeChambeau found himself in the bunker. He got out on his first attempt and sunk an insane 49-foot putt to save par.

And then he was back to mashing out of the rough on 14.

His lunacy continued on 18 with a one-stroke lead and a moonshot off of the tee.

The longest drive of the day on 18. 💪#QuickHits pic.twitter.com/pqHWMlWjYg

Moments later, DeChambeau found himself with a five-footer to win. He drained it and went bizerk.

An emphatic reaction.@B_DeChambeau is a winner at Bay Hill. 🏆#QuickHits pic.twitter.com/sdohKTXTCB

The win meant a lot to DeChambeau, and he earned every bit of the glory.

"I don't even know what to say to win at Mr. Palmer's event … It's gonna make me cry." pic.twitter.com/VMNJmFUPIe

It was unconventional and not always pretty, but he got it done. Perhaps he will enjoy a celebratory protein shake in the clubhouse.