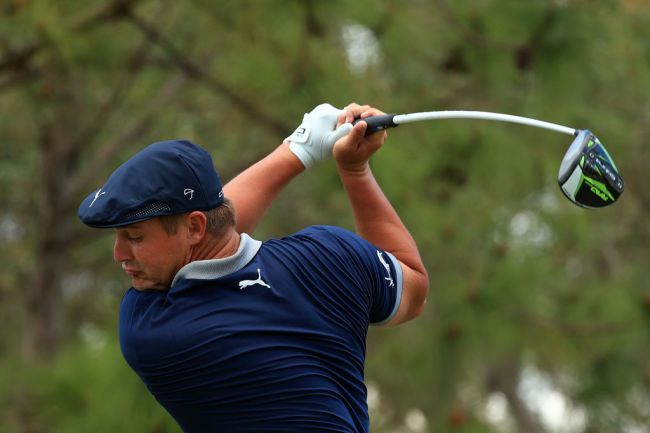 Since operation bulk-up got underway for Bryson DeChambeau, we’ve seen him do some pretty unbelievable things with a driver in his hand. His most impressive feat came during U.S. Open week when he completely overpowered Winged Foot just like he said he would on his way to his first major.

Each week DeChambeau tees it up, it seems like he’s one-upping himself off the tee time and time again.

For this week’s Arnold Palmer Invitational at Bay Hill, everyone’s eyes seem to be on DeChambeau and whether or not he could attempt to drive the Par 5 6th. The hole is listed at 555 yards and can be pushed further, but a direct line between the tee box and the water-guarded green requires about a 350-yard carry to clear the hazard. DeChambeau leads the PGA Tour in driving distance averaging 323.9 yards off the tee.

During his Wednesday practice round, DeChambeau elected to give it a go. He went to the very front of the tee box with two launch monitors to capture data, but in his two attempts came up well short. It’s worth noting that the wind was hurting off the tee, but even without wind playing a factor, it looks as if neither attempt would have found land.

Bryson DeChambeau is trying to drive a 590-yard Par-5 this weekend.

The direct line is about 340 yards 😳pic.twitter.com/ZHP8M1hfqr

Last month DeChambeau was asked whether or not he’d attempt to drive the 6th green and without hesitation, he explained that he would.

“If I play this year I will definitely do it,” DeChambeau told GOLF. “No. 6 at Bay Hill is one of those I’ve been eyeing. I think I can do some pretty cool things on it.”

After his practice round on Wednesday, he said that if the wind does switch at any point during the tournament then he would try to play a draw off the last fairway bunker in an attempt to leave himself no more than 30 yards into the green, according to Golf Channel.