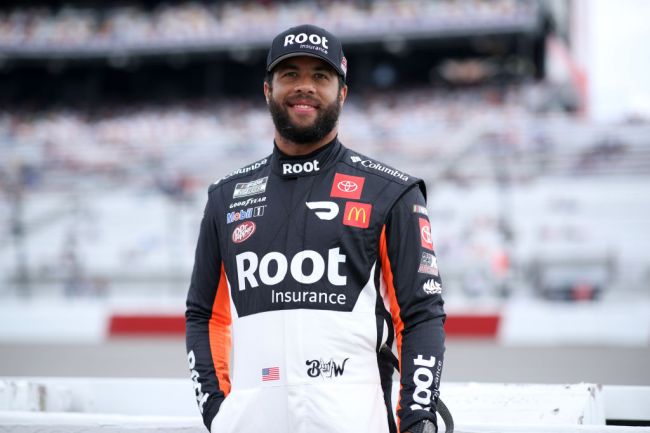 As per usual, Talladega Superspeedway delivered some high-flying drama, literally, as Joey Logano’s car got airborne during Sunday’s Geico 500. While Logano undoubtedly had the wildest ride of the afternoon, Bubba Wallace had quite the scary moment as well.

Logano’s No. 22 car flew up in the air and turned upside down before coming to a crashing stop roof first. As this was taking place, Wallace’s No. 23 car just so happened to be on the perfect path to see the accident unfold. Logano’s car looked like it was going to land directly on top of Wallace’s, but thankfully that didn’t happen, and both drivers were fine following the crash.

Related: We Caught Up With NASCAR’s Bubba Wallace And Talked About Being On ‘Cold As Balls’ With Kevin Hart, Getting Bored During A Race, And The State Of His Golf Game

NASCAR released Wallace’s in-car footage showing the unbelievable viewpoint he had of Logano’s car flying through the air nearly taking him out. Wallace also happened to be mic’d up, and his exchange with his spotter as the crash unfolded was unbelievable.

Spotter: We’re in it!

You can see and hear it for yourself at the 57-second mark of the video below. The video then returns to Wallace at the 1:19 mark for another exchange in which Wallace jokes around with his spotter saying that he probably sh-t himself.

Seeing a car just casually flying through the air while dozens around said flying car are zooming around at 200 MPH is such an exhilarating and horrifying sight. Logano was the only driver in the incident that couldn’t continue racing, and thankfully everyone involved came out just fine.