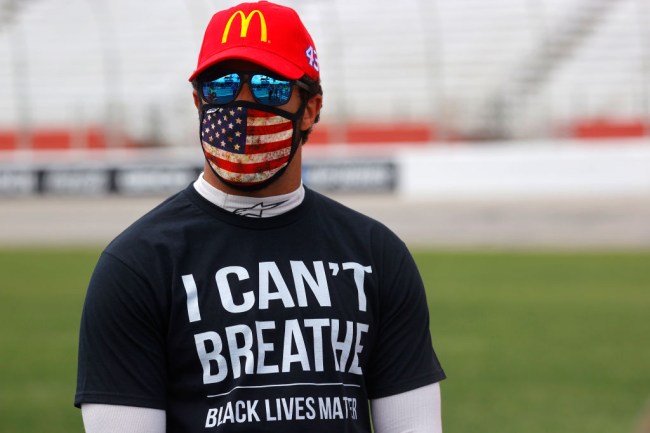 The Confederate flag is one of the more divisive symbols in America, as many people view it as the embodiment of the country’s racist past while others continue to cling to it by using the oft-cited “heritage” as an excuse, and if you’ve ever attended a NASCAR race in certain areas of the United States, you’ve likely seen fans who are more than proud to fly it and wear apparel emblazoned with it.

This is an especially interesting issue when you consider NASCAR’s historical lack of diversity, and as of right now, Bubba Wallace is the only black driver to regularly participate in the organization’s premier events. However, over the weekend, he and some of racing’s biggest names created a video to encourage others to “listen and learn” as a way to battle injustice as people around the country rally to do the same.

On Monday, Wallace spoke with CNN and discussed what he thinks NASCAR should do next to show it’s committed to fighting racism. He suggested banning the Confederate flag while sharing his feelings on the symbol and the negative impact it can have.

NASCAR drivers have joined the growing list of athletes and sports leagues throwing their support behind the nationwide protests against police brutality.

"We are trying to deliver the message across, listen and learn," says NASCAR driver Bubba Wallace. https://t.co/dP88eNKB2i pic.twitter.com/vSsu4UrRUM

“My next step would be to get rid of all Confederate flags. There should be no individual that is uncomfortable showing up to our events to have a good time with their family that feels some type of way about something they have seen, an object they have seen flying.

No one should feel uncomfortable when they come to a NASCAR race. So it starts with Confederate flags. Get them out of here. They have no place for them. The narrative on that before is I wasn’t bothered by it, but I don’t speak for everybody else. I speak for myself. What I am chasing is checkered flags, and that was kind of my narrative.”

After the pace laps before Sunday’s race, drivers stopped on the track and their crew members stood on pit row for a moment of silence meant to show their commitment to listening and learning. NASCAR official Kirk Price took things one step further by kneeling before the national anthem, which Wallace also addressed in the interview:

After Sunday’s race, Ryan Blaney—a good friend of Wallace—was asked about the Confederate flag policy and he had the same opinion as his buddy, saying that he doesn’t want them around. However, Brad Keselowski—who appeared in the aforementioned video—does not feel the same way, saying:

“I only salute one flag and that’s America’s. I recognize that that flag might mean something different to different people, but it doesn’t mean United States of America to me.

But I’m not gonna tell people they need to get rid of it. That’s not my right either. But I certainly don’t salute it or respect it or probably anyone else who feels the same way. But, at the end of the day, it’s not our call.”

While drivers seem to have different opinions on how strict they should be about banning the flag from the sport, it seems like NASCAR may want to listen to the only black person on its circuit. Just a thought.