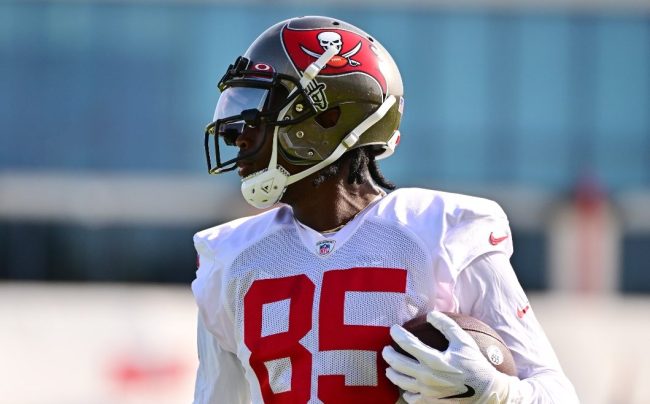 The Tampa Bay Buccaneers have benefited greatly from having Tom Brady under center. Not only did they immediately win a Super Bowl with him, but the front office has been able to easily acquire top talent through free agency. The latest addition in Julio Jones has sparked intrigue across the league, but rumors are the Bucs have the best version of Jones in training camp.

According to Jeff Darlington, one of his sources informed him that “Julio Jones looks like the 2019 version of himself.” The superstar receiver has struggled with injuries the last two seasons after playing as an absolute stud in 2019. In that season, Jones recorded 99 receptions, 1,394 yards, and six touchdowns. If he truly is back to his normal self, then the rest of the league should be scared of the Buccaneers.

A Bucs source told @JeffDarlington that Julio Jones looks like the 2019 version of himself 👀 pic.twitter.com/6NJedZ3yUy

Just imagine Tom Brady throwing the ball to Julio Jones in his prime. That’s a combination that could be as lethal as when Brady teamed up with Randy Moss. As if the Bucs needed any more help in the wide receiver room, as Mike Evans and Chris Godwin are two of the best in the league. We’ll see how it plays out, but early reports from the Buccaneers training camp indicate Julio Jones is fully healthy.

If that’s the case, R.I.P. to the rest of the NFL. All eyes will be on Jones throughout the season, especially considering he’s dealt with nagging injuries two years in a row. So much so, that it’s hard to imagine Julio Jones is truly back to regular form. Regardless, the Buccaneers will do everything possible to keep him on the field.