Buccaneers’ Player: Why Was Brett Favre Was Allowed At The Game And My Family Wasn’t? 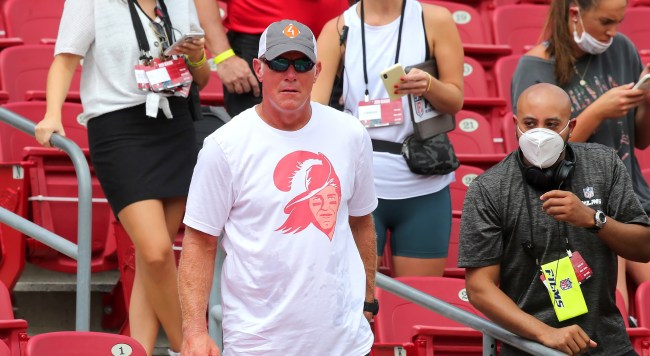 In case you missed it, Hall of Famer Brett Favre, who called out Buccaneers coach Bruce Arians last week, was in attendance at Sunday’s game in Tampa Bay against the Carolina Panthers.

Favre was even rocking one of those new Tompa Bay t-shirts that Tom Brady has been hawking since taking his talents to the Bay.

Well, it would have been, if, you know, other people, like, say, the families of the players actually playing in the game had been allowed to attend.

Upon seeing a tweet posted by Fox Sports with a picture of the Gunslinger and the caption, “Spotted in Tampa Bay. Brett Favre crushing some chips while wearing a Tom Brady @Buccaneers shirt,” Buccaneers center Ryan Jensen posed a very valid question.

“So he can go to the game but my family can’t? Interesting,” Jensen replied on Twitter.

So he can go to the game but my family can’t? Interesting https://t.co/bSDN7Vd6hD

Jensen isn’t wrong. The Buccaneers previously announced that no fans were going to allowed in the stadium for at least the team’s first two homes games. And that included members of players’ families.

Here is the full letter from #Bucs COO Brian Ford to season ticket holders on no fans at the first two home games: pic.twitter.com/wMwg6A79QN

Also… where was Favre’s mask? Or does that rule also not apply to him?

Jensen wasn’t the only one a little ticked off by Favre’s appearance at a game to which he literally has no connection to whatsoever.

“So let Joe get this straight,” wrote JoeBucsFan.com.

“Bucs fans get shut out of a home game they yearned to see, but Brett Favre gets to enter the stadium seats for a close look at the Bucs?

“Joe saw the video below and wanted to vomit. Who made this decision at One Buc Palace, and why was it made? Does Bucs management think it’s funny to force lifelong fans to stay home while a former arch rival quarterback is allowed a shot at the seats and an open-air look at Tom Brady?”

He goes on to point out that, yes, media is allowed in the game and Favre does have a SiriusXM show that airs once a week, but “non-photo media is limited to the press box in this COVID-19 environment.”

Speak on it ryan!

Turns out, Favre was officially at the game as an “NFL Films correspondent” with a “couple” members of his family, along with a “pretty decent-sized film crew,” reports ProFootballTalk.com.

Still doesn’t explain his t-shirt or the fact that he wasn’t wearing a mask, but hey…