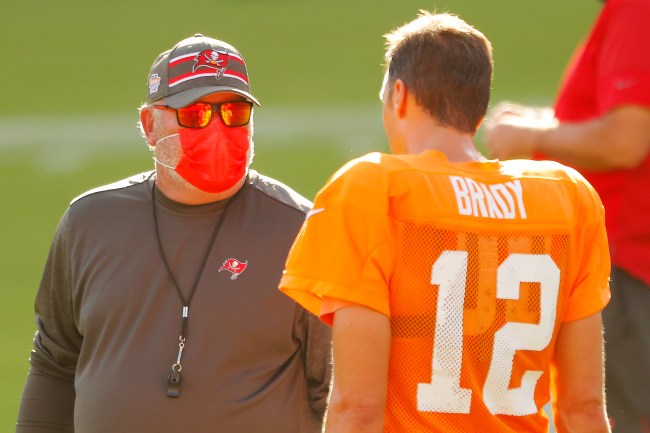 Can you imagine Frank Vogel calling out LeBron James on the very first game for making a crucial mistake down the stretch? David Blatt was sent back to Europe mid-season after leading the Cavs to the top of the division and an NBA Finals appearance the year before.

Bruce Arians playing hard ball with Tom Brady could be the career equivalent of sky-diving without a parachute.

Arians publicly called out Brady and his two picks in a lackluster loss, using phrases like “bad decision” and incorrectly blaming the best quarterback to ever live for a misread, which he later walked back.

Brett Favre addressed the dangers of being so publicly critical of your franchise’s best player, especially considering it flies in the face of two decades of the Patriot Way.

“I think the last person you want to call out after the first game of the year is Tom Brady,” Favre said Tuesday on SiriusXM NFL Radio. “Now, maybe they had a mutual truce going into the game, going into the season, ‘Hey, I’m going to be hard on you. I want the guys to know we’re going to treat you the same even though technically I’m not, so are you OK with it?’ If they have that truce, great. If not, I think you are barking up the wrong tree.

“Bruce Arians is the head coach, he’s gonna do it the way he wants to do it — and I’m not saying that it’s right or wrong — but what’s happened in New England for so many years is that it worked,” Favre said. “And I’m not saying that it’s the right formula, but it certainly is one of the right formulas. I just don’t see any good that comes out of calling your quarterback out.”

On Wednesday, Arians, who also called out Gronk after the loss, responded to the blowback he received from the Gunslinger and others who believe scapegoating TB12 is a death sentence.

“Tom and I are fine,” Arians told reporters Wednesday. “I don’t really care what other people think. So it’s just what he and I think. We left the stadium fine. We showed up today fine. There ain’t nothin’ to talk about.”

The Bucs take on the 0-1 Carolina Panthers in Week 2. Tom, lets keep the “bad decisions” to a minimum, rookie.