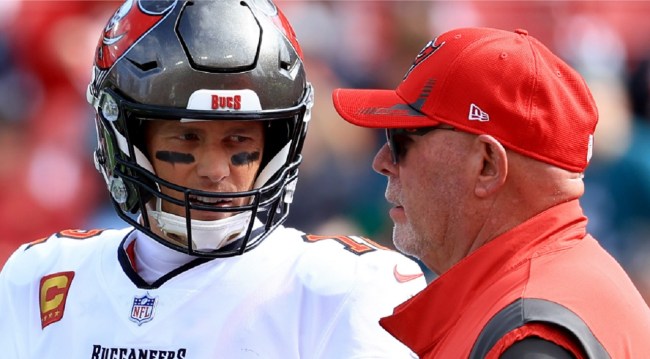 Tampa Bucs head coach Bruce Arians suddenly retired from coaching, and the team is trying to let everyone know that it wasn’t because of Tom Brady.

On Wednesday night, Arians announced that he was no longer going to be the team’s head coach and was moving into a front-office role.

Defensive coordinator Todd Bowles picked to replace him. Staff being told the news at this hour.

He said he’s relinquishing the Tampa job because “succession has always been huge for me. With the organization in probably the best shape it’s been in its history, with Tom Brady coming back … I’d rather see Todd in position to be successful and not have to take some [crappy] job. I’m probably retiring next year anyway, in February. So, I control the narrative right now. I don’t control it next February because [if] Brady gets hurt, we go 10-7, and it’s an open interview for the job … I got 31 [coaches and their] families that depend on me. My wife is big on not letting all those families down.”

Arians explained his reasoning in a telephone interview with NBC Sports and the Los Angeles Times.

He was scheduled to inform his coaching staff in an 8 p.m. Zoom call Wednesday, and he planned to send a message to his players explaining his decision concurrent with telling his coaches.

The Bucs have reportedly told the TB Times that Brady learned Arians was stepping down on the “same day or a day after” Brady unretired and are now insisting Arians’ decision to retire had no nothing to do with Brady.

#Bucs QB Tom Brady was informed Bruce Arians planned to step down and Todd Bowles would succeed him as head coach either the same day or a day after the QB announced he was ending his retirement, the @TB_Times has learned. Team insists it was not related to Brady’s decision.

No one believed the Bucs’ report.

The Bucs can try and convince us of this, but it sure as shit seems like Brady didn't like Arians, got him punted upstairs, then unretired. https://t.co/BN1XUvAe27