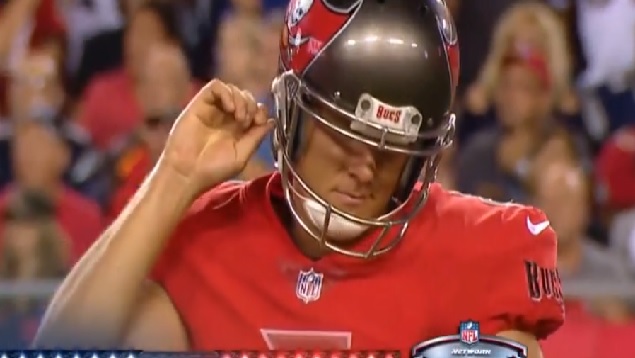 Kicker Nick Folk is probably not going to be playing for the Tampa Bay Bucs after his disastrous game against the New England Patriots on Thursday Night.

Folk, who has been struggling all season, missed three field goals including a crucial 31-yard field goal midway through the fourth quarter which led to pissed off Bucs fans to boo the shit out of him.

Not only did Folk get crushed by fans in the stadium but he also got mercilessly dragged on Twitter.

Nick folk lining up for the kick pic.twitter.com/tu0NLnqG8a

What Nick Folk sees when he attempts a kick: #NEvsTB pic.twitter.com/9wH6Bvjuva

Nick Folk after Pats give him the game ball. 😂😂😂 pic.twitter.com/ljl17TVjqi

Let's Go Back to the Film to see what Happened on Nick Folk's FG attempt. pic.twitter.com/59ezfdXC3a

This gone be Jameis at Nick Folk Locker after the Game 😂😂😂 pic.twitter.com/UZpXAmPbQk