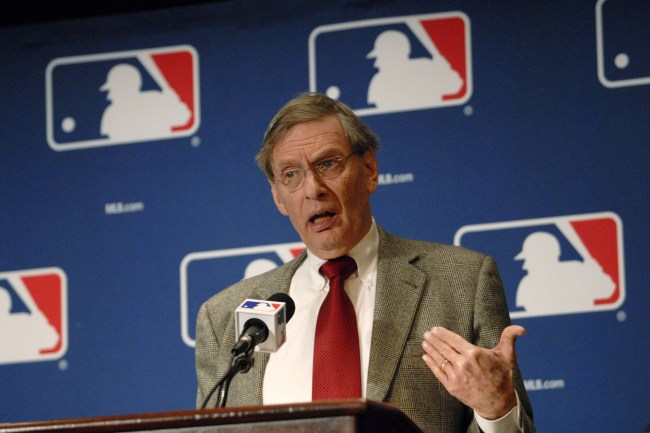 Former MLB Commissioner Bud Selig has a new autobiography coming out called For The Good of the Game, which details a lot of different things that went on during his time in the Commissioner’s Office. One of those things happens to be an excerpt about his traveling around in the summer of 2007 to witness firsthand former slugger Barry Bonds break the all-time home run record — which, you know, is something a Commissioner should do for the sport he runs.

Sadly, Bud Selig — who will forever be linked to the steroid era and Bonds specifically — went in a little bit too deep about his thoughts on traveling from ballpark to ballpark to watch Bonds’ quest. In fact, Selig sounds downright miserable when talking about his journeys, making him appear self-entitled as he was forced to give up his luxury suite while making a hefty salary.

“While I felt responsibility to be on hand for Bonds’s moment, I’ll admit I had a fantasy that I’d be spared when I went to Cooperstown to see Ripken and Gwynn be inducted into the Hall of Fame. Nobody would have blamed me for being there rather than on the road with Barry. But I received no reprieve, so I trudged on to Dodger Stadium and then Petco, the Padres’ beautiful home that had opened only three years earlier.”

“This awkward spectacle was the final exclamation point in an era of unprecedented power hitting throughout baseball. I’d seen it all, studied it, and would continue to study it for years.

I know some people will forever link me with Barry Bonds. Some will say baseball’s failure to limit the impact of steroids quicker is my failure. They may even call me the steroid commissioner.”

Well, it sure sounds as if Bud Selig was a real gem, doesn’t it? The dude was at the head chair of MLB and he’s complaining about witnessing history — which just so happened to be one of the biggest records in the sport — all because he failed to put an end to the perceived steroid era in his sport. The fact that he’d go this far to describe his feelings is a little bit strange, but one has to admire the candidness; I suppose?

With current MLB Commissioner recently being called out by Justin Verlander for allegedly juicing baseballs, MLB is probably happy that the All-Star Game is here to try and deflect some of this bad publicity, because it sure isn’t good for the game.