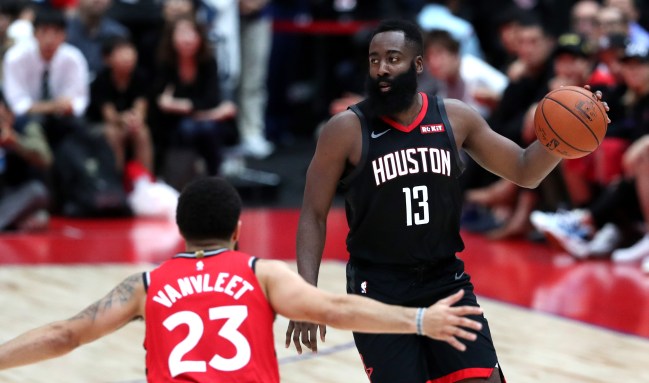 As you may have heard, Houston Rockets superstar James Harden has been working on a new running one-legged three-point shot.

“Whether it’s basketball, whether it’s fashion, everything I do I’m creative. I find different ways to impact whatever I’m doing,” Harden told Forbes this week.

Harden unveiled his new shot last week during the Rockets’ game against the Clippers in Hawaii. It didn’t go in, but he was fouled on the play so…

This week when NBC Sports’ James Ham asked Buddy Hield about Harden’s new move and if it was something he was going to try, the Sacramento Kings shooting guard had a hilarious response.

“Hell no,” replied Hield. “That’s not a high-percentage shot for me right now. I might take a one-leg step-back shot when I get in the paint, but not at the three-point line. Whatever James has going for him, he has going for him. It’s a different light over there than here in Sacramento. I’ve got to stick to the basics.”

Buddy Hield on whether he’s working on a James Harden one-legged 3-pointer for this season. pic.twitter.com/Dx4IOv932p

Never say never, as they always say. New Kings head coach Luke Walton has already gone on record as saying Hield will have a “neon green light” and with Hield’s contract up after next season he might just need to add that move to his arsenal at some point down the road.