Buffalo Bills GM Brandon Beane Says He’d Consider Cutting A Player That Refuses To Get Vaccinated, Calls It An ‘Advantage’ 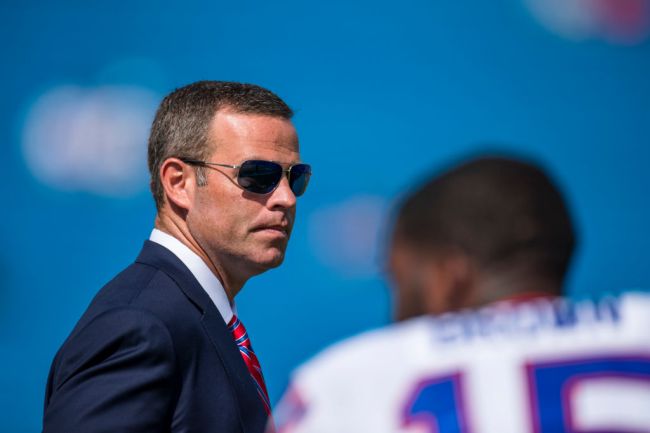 One of the most interesting things to keep an eye on with NFL training camps fast-approaching is how teams around the league are going to deal with players that elect to not get the COVID-19 vaccine. Buffalo Bills general manager Brandon Beane has made his stance rather clear in stating that he’d consider cutting an unvaccinated player. Beane went as far as to say that having the option to cut a player that doesn’t get vaccinated an “advantage.”

Beane was asked the theoretical question about cutting a player at the lower-end of the Bills’ 53-man roster and if he’d consider making that decision if they weren’t vaccinated. Yeah, I would, Beane said during the ‘One Bills Live‘ broadcast on Wednesday.

“You guys saw it in the fieldhouse, we had three and four meetings going on, and sometimes you’re talking over each other. But it was the only way to pull it off and be social distant,” he added, referring to NFL protocols limiting the number of players who could meet at one time. “So it would be an advantage to cut a player and fall under that umbrella.”

Beane’s comments about potentially cutting unvaccinated players come less than a month after the NFL sent a memo to all 32 teams strongly encouraging every player and staff member to receive the vaccination.

The memo stated that “tier 1 and tier 2 employees (other than player) should be expected to be vaccinated unless they have a bona fide medical or religious ground for not doing so. Any staffer that refuses to be vaccinated without either a religious or medical reason will not be eligible for Tier 1 or 2 status and therefore will not be permitted access to ‘football only’ restricted area and may not work directly or in close proximity with players.”

The memo very clearly presented the point that if anyone that refuses to get vaccinated won’t be given the opportunity to do their job to the best of their abilities. The scenario of employees having to choose between getting the vaccine or losing their job seems like a very real possibility. An NFL team isn’t going to employ someone that can’t fully do their job, and based on Beane’s statement, that goes for players as well.