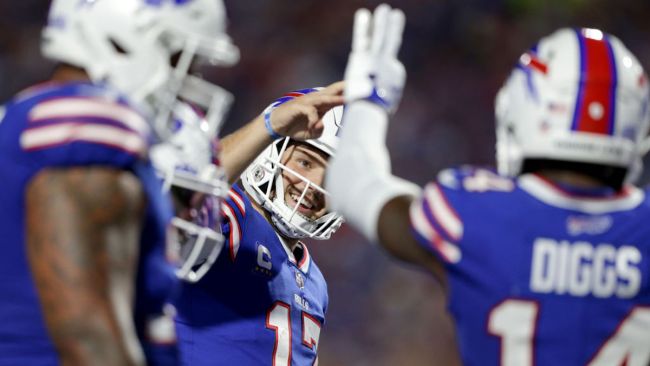 After steamrolling the defending Super Bowl champion Los Angeles Rams in the opening game of the season, the Buffalo Bills followed up that Week 1 victory with an absolute destruction of the Tennessee Titans, who were the #1 seed in the AFC last season.

Following two back-to-back weeks of utter domination, many NFL fans are convinced that the Buffalo Bills are certainly worthy of their preseason distinction of being Super Bowl favorites. Las Vegas certainly agrees, as the Bills, who opened the season with +650 odds to win the Lombardi Trophy now boast betting odds of about +400.

In awe of the Bills’ performance, NFL fans took to Twitter to give the team their flowers and wonder if there’s any team in the league that can stop them

Bills appear to be an ABSOLUTE WAGON

Is this what it was like for Bills Mafia watching the Patriots for 20 years? pic.twitter.com/QXQ6rGC7se

The @BuffaloBills have outscored last season's Super Bowl champs & No. 1 seed in the AFC by a combined score of 72-17 😲@PSchrags: "This is a locomotive." 🚆#BillsMafia pic.twitter.com/SVGaxiGPSJ

The #Bills were touted all off-season as the Super Bowl favorites and I still didn’t expect them to look THIS dominate. What a time to be a Bills fan.

The Bills have played the Super Bowl champions and AFC’s top seed from last year in their first two games. Through just under 7 quarters …

The Buffalo Bills will look to continue their insane start to the season when they take on Tua Tagovailoa, Tyreek Hill, Jaylen Waddle, and the rest of the 2-0 Miami Dolphins on Sunday.

As things currently stand, it’s looking like the Buffalo Bills and the Kansas City Chiefs are on an inevitable collision course to the AFC Championship game. Over in the NFC, the Philadelphia Eagles, Los Angeles Rams, and Tampa Bay Bucs are looking like early contenders.

RELATED: This Insane Stat Might Prove That Josh Allen And Stefon Diggs Are The Best QB-WR Duo In NFL History