Buffalo’s Running Back Went For Almost 300 Yards, Five Touchdowns In The First Half 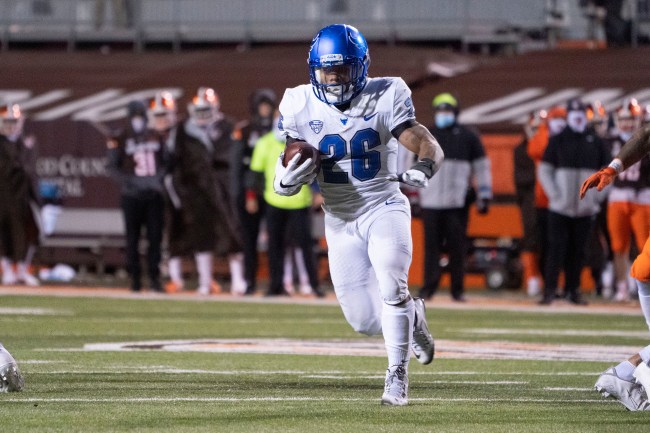 Jaret Patterson isn’t a household name in college football, but he should be. The 5-foot-9, 195-pound junior is averaging more than seven yards per carry this season and rushed for 1,799 yards and 19 touchdowns as a sophomore in 2019.

Buffalo’s star tailback ran for a program-record 301 yards and four touchdowns against Bowling Green a week ago and hit the ground running on Saturday against Kent State. Though it was only an 11-point game at the half, the Bulls’ entire offense ran through Patterson, literally. He scampered for 156 yards and three scores — in the first quarter — and kep the momentum rolling in the second quarter, adding another 111 yards and two touchdowns.

Should he choose to forgo his senior season, Patterson could hear his name called on the first three days of the NFL Draft in April. The only concern with his production may be the number of touches per game, but with the COVID-19-shortened season, his senior year won’t see as much of a workload as past years.