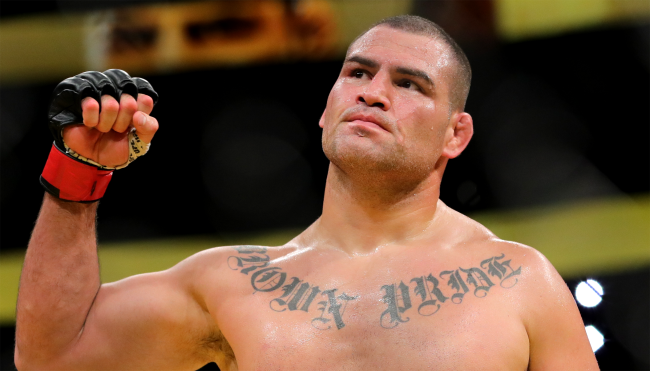 On Wednesday, two-time UFC Heavyweight Champion and former WWE star Cain Velasquez had his first day in court since he was involved in a shooting in the San Jose area on Monday.

During his arraignment at San Jose’s Hall of Justice, the 39-year-old Velasquez was officially charged with 10 crimes. They include first degree attempted murder, premeditated murder, multiple counts of assault with a deadly weapon, and shooting an occupied motor vehicle.

4/ Cain Velasquez was the suspect arrested yesterday in connection with this incident. He was booked into Santa Clara County main jail for attempted murder.

The motive and circumstances surrounding this incident are still under investigation at this time. pic.twitter.com/bBuuPQytNx

Goularte is facing felony charges of a lewd and lascivious act with a child under the age of 14 for allegedly molesting a four-year-old child who is a close relative of Velasquez at a daycare center.

“Velasquez, 39, fired a handgun multiple times into a truck carrying Harry Goularte, and two older relatives and rammed the truck with his truck,” Santa Clara County District Attorney Jeff Rosen stated in a news release. “Goularte’s male relative, 63, was struck once, but expected to survive.”

“The sad tragedy is that Mr. Velasquez chose to take the law into his own hands, endangering the public and everyone in the truck. This act of violence also causes more pain and suffering to his family.”

Velasquez was ultimately stopped and arrested by Morgan Hill police near Madrone Avenue in San Jose.

Harry Goularte was released under the conditions that he stay in home detention in Morgan Hill, stay 100 yards away from any child under 14, and wear an electronic monitoring bracelet.

Goularte was on his way to get the monitor when Velasquez started shooting, prosecutors said.

Many in the mixed martial arts community expressed their support for Velasquez on social media.

I don’t want to live in a country where you can’t shoot someone who sexually abused your child. #FreeCain

Cain got my support 💯 https://t.co/K0MnaYUckj

If it’s true Cain Velasquez tried to kill that boy cause his daughter was molested then damn, that boy got what he deserved

Cain Velasquez is in trouble for shooting someone who molested his child. I stand with him on that !! But I wonder if he should have shot him or beat him close to death. What would be worse in the eyes of the law ?

If the stuff about Cain is true free him