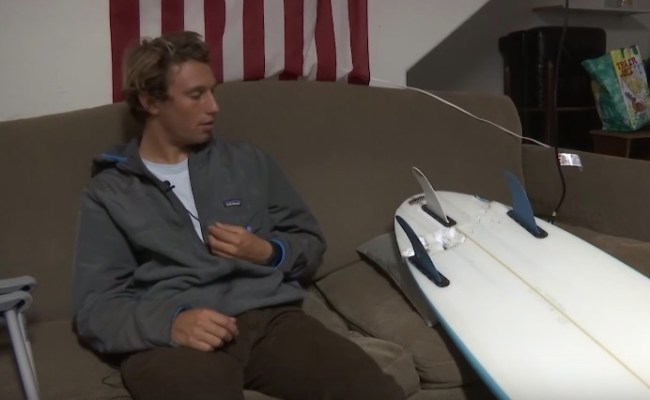 Cal Poly sophomore Nick Wapner has been surfing almost his entire life. He’s been riding waves since the age of 4 but never has he experienced anything as life-threatening or wild as what happened this week when he narrowly escaped the jaws of a Great White shark.

Tuesday afternoon he was paddling out at Montaña de Oro State Park in San Luis Obispo which is roughly halfway between Los Angeles and San Francisco for anyone out there in need of a California geography refresher.

He was surfing the break off of Sandspit Beach when out of nowhere the shark approached him from underneath (obviously). Before he knew what was happening his leg was inside of the Great White shark’s mouth. The shark first went for his ankle but moved up to his thighs.

The entire incident only lasted a few seconds and he’s not sure how he got away, but it sounds like he kicked the shark in the face hard enough to startle it and send it swimming away.

Say what you want about Florida being an assbackward state and the wild wild west full of deadly creatures but at least we don’t have *that many* Great White sharks, at least not compared to California.

The experienced surfer said he didn’t feel any pain initially as adrenaline shot through his body.

After releasing him, the shark turned in a flash, leaving Wapner with a lasting, haunting image of its entire torso — giant head, massive jaws and beady eyes — as it pivoted away.

“The thing was huge,” Wapner said.

He estimated the predator to be 15 feet in length, with an 18-inch dorsal fin. Wapner believes the shark was biting out of curiosity and realized the object in its mouth wasn’t the taste it was looking for. (via)

His friends were already back on shore when the shark attack occurred, an attack he believes was caused because the shark mistook him for a seal. His primary survival goal was to get back to the beach, once there he assessed his wounds and then tied a tourniquet with his wetsuit to try and slow down the bleeding while they then tried to get him help.

It helps that he and his friend both had lifeguard training and were able to determine that no major arteries had been ruptured. After that, they made it to the parking lot 5-minutes away and off to the hospital where he received 50 stitches and appears to be in good spirits based on the numerous interviews he’s done since.

For more on this, you can visit SanLuisObispo.com.