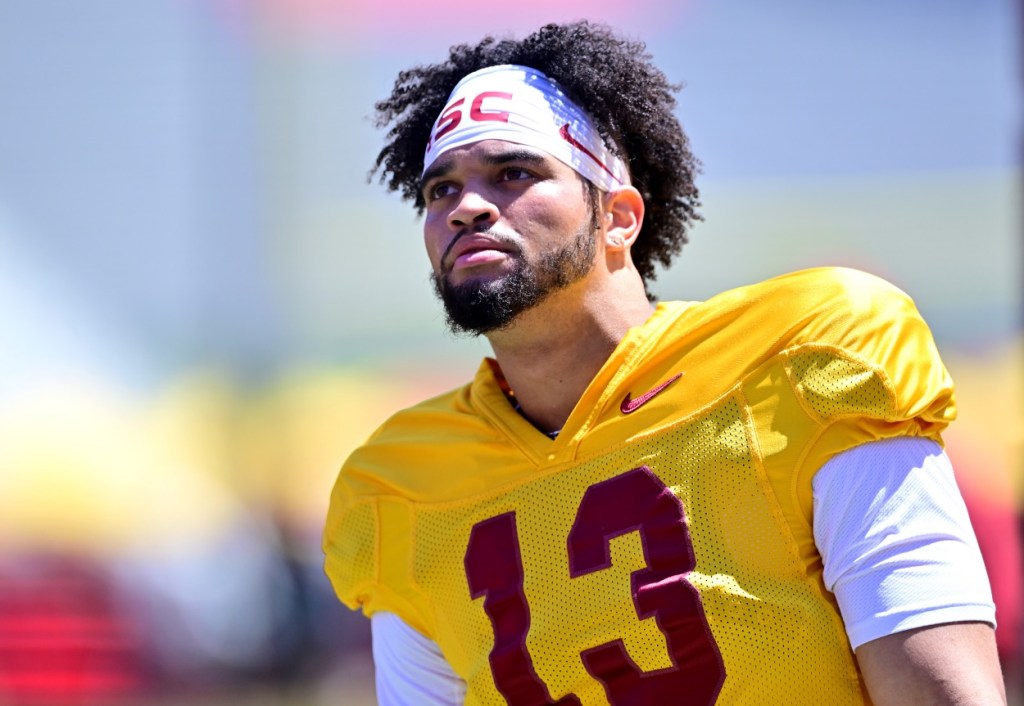 The USC Trojans aren’t officially back yet but they’re on ‘back radar’ for now. They are currently ranked 14th in the preseason poll.

At Oklahoma, Spencer Rattler and Caleb Williams were battling for the starting spot. Caleb only had 24 more passing attempts in the 2021 season than Spencer. But at USC, Caleb is the clear pick as Trojans’ starting quarterback, and with that comes the freedom to kick it into the next gear.

Speaking with reporters after practice on Wednesday, Caleb Williams suggested that he and head coach Lincoln Riley have developed a system of unspoken communication. That, and a newly heightened level of trust have revolutionized the game for Caleb so far this year. Here is the video with his comments below:

Caleb Williams: “He has a lot more trust. He gives me a lot more flexibility. You know, sometimes, I even look over and he’ll give me the go-ahead, or we’re kind of communicating. Me and my teammates were laughing about it.”

“We kind of communicate really fast when I’m on the field and he’s on the sideline. Just, you know, thinking through plays and things like that. And, sometimes, I’ll call a play he likes it and he’ll give me the shoulders, which [I] know he means go ahead or give me a thumbs up, which means go ahead. So, it’s a lot more trust and a lot more flexibility.”

Caleb Williams went on to say (via On3): “I don’t necessarily just have to worry about playing. I can see things better from the defensive side and I know exactly where everybody has to line up, exactly where they’re gonna be on our side. Making sure we get the right runs into certain either blitzes or defensive fronts. Making sure that we have certain checks.”

He spoke about teammates:

USC QB Caleb Williams on 6’6 inside linebacker Eric Gentry: “He’s difficult to get the ball over and I’m glad we have him on our team.” pic.twitter.com/UIMVSgHTbP

Caleb Williams went on to add that he’d like to be an extension of head coach Lincoln Rile on the field, he called it ‘Coach Riley Part Two’. Saying that because Coach Riley can’t be out there he needed to fill that role on the field.

On the one hand, getting so close with a coach that you’ve developed an unspoken language certainly means you’re pretty close to mirroring his actions and thoughts on the field.

But it also creates a world where Caleb Williams could get way too comfortable in his decision making process on the field, make mistakes, and mistakenly attribute it to what the coach would’ve done. Keeping a clear chain of command on the field is important for accountability.

I won’t begin to know what happens at their practice and I’m sure they’ve worked that part out but I’ll be curious to see just how fluid this relationship has become between Coach Lincoln Riley and his star quarterback.

When Caleb Williams first entered the transfer portal, a return to Oklahoma was his top option. https://t.co/Spmv2W8R5z