If USC Football Falls Short Of LenDale White’s Prediction For 2022, It Would Be A Dissapointment 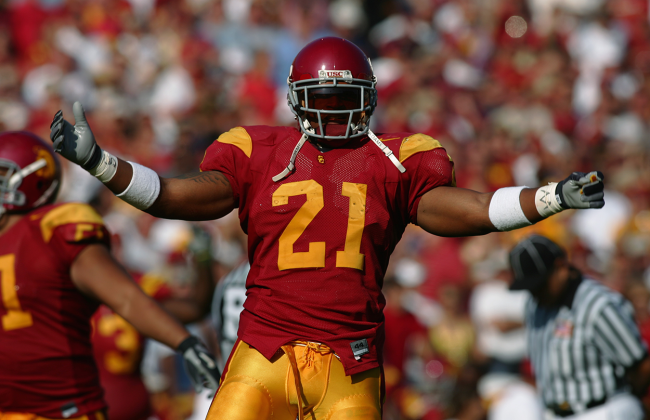 USC football is the biggest boom or bust team in the country this fall. The Trojans have all of the pieces to compete for a national championship in Lincoln Riley’s first year as head coach, but putting them all together is not as easy as it sounds.

After hiring Riley in November, USC proceeded to absolutely dominate the transfer portal. Most prominently, the team brought quarterback Caleb Williams over from Oklahoma and wide receiver Jordan Addison, the reigning Biletnikoff winner, from Pittsburgh.

In all, the Trojans added 18 Power Five Conference transfers and two immediate impact depth players from Group of Five programs. They completely rebuilt the roster and there is no reason that they should not contend for a College Football Playoff spot this year if everything can come together.

LenDale White, one of the most notable running backs from the “glory days” of early 2000s USC football, thinks so too.

White appeared on The Herd with Colin Cowherd this week and gave his prediction for his alma mater this fall. It was bold, but not unattainable. In fact, it should be the expectation.

“I see a 10 win season with this team. I’ve been around a lot of programs and I’ve been around a lot of coaches. This guy has a way with words, he has a way with players and when these kids start to believe in that, the ball gets rolling, anything is possible. I’m not taking any shots at these schools within the Pac-12. Rather, if we get rolling, I don’t really see any team has beaten us in the past. We have a whole, like you said, a different roster than the kids that we were playing with last year and the kids that we have on this roster right now are two totally different teams. So I honestly believe that we can win 10 games and I wouldn’t be surprised if we ended up in the Rose Bowl this year honestly.”

USC’s path to ten wins likely comes down to the final week of the 2022 season.

Here is how the Trojans’ schedule shakes out this fall:

In the best case scenario, USC runs the table. Obviously.

However, a path to 10 wins seems more likely. Utah and Notre Dame will be the biggest challenges for the Trojans this fall. Fresno State is a potential trap game with Jake Haener back at quarterback. Other than that, USC should win at least nine games.