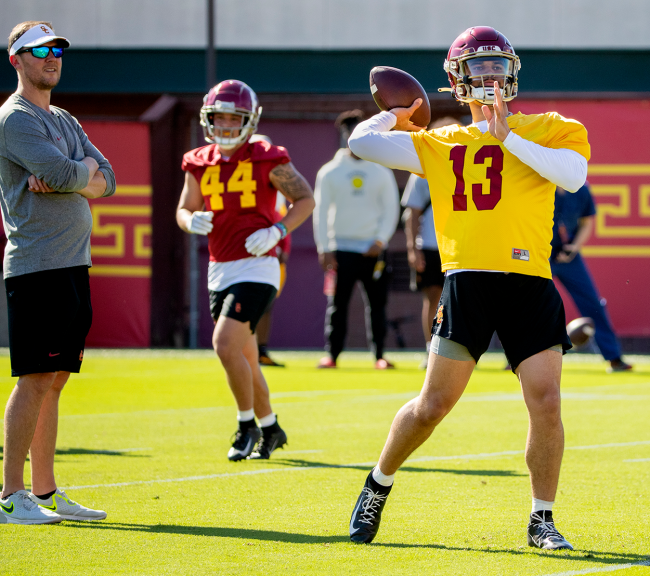 When Caleb Williams entered the transfer portal after his freshman season at Oklahoma, the expectation was that he would re-join Lincoln Riley at USC and that’s exactly what happened. However, despite what Sooners fans might claim, the former five-star quarterback wants to be very clear that there was not any tampering involved.

Williams was recruited to Oklahoma out of high school by Riley. And then, after the regular season, Riley left for the same job with the Trojans.

Initially, Williams did not follow. He choose to stick out the remainder of the year and played with the Sooners during the Alamo Bowl.

A few weeks later, the Washington D.C.-native entered the transfer portal and was reportedly deciding between UCLA, Wisconsin and USC. It was always the Trojans.

Despite the logical move, which ended up playing out, if Williams and Riley were to have made contact prior to the time that he entered the transfer portal, that would be illegal. It would be considered tampering and would violate NCAA rules.

Obviously, there is no way of knowing what really went on with Caleb Williams, Lincoln Riley and USC.

But Williams remains adamant that there was not any funny business.

The Trojans began spring practice last week and Williams is starting to settle in with his new team. He and Riley will be tasked with returning one of college football’s greatest legacy programs to a state of relevancy after years of mediocrity.

On his way out to his first practice with the Trojans, Williams was so excited that he ran right by the entrance. Just completely missed it.

After his first day with USC, Williams spoke with the media about how his first month in cardinal and gold has gone.

“It’s been a little weird. I wasn’t ever expecting to be here,” Williams said of transfer decision. “But now I’m here. So, I’d say we have a lot of similarities from workouts and verbiage and language — just talking to the coaches, talking to the strength staff, and thinks like that. Hearing that and a bunch of guys — coaches — came to here (USC) from there (Oklahoma), my old school. Like I said, it’s just a little weird because you have new colors, new logos and all these other things, so it’s a little weird. But it’s been really, really fun.”

In addition, Caleb Williams spoke about what went into his decision to re-join Lincoln Riley and transfer to USC.

While discussing the timeline in which he made a decision, Williams made it very clear that he had not spoken to Riley from the time that his former head coach left for USC until he entered the transfer portal. There was no tampering.

“Biggest question, I’d say it was mainly asking Coach Riley some questions about — just kind of getting back together. Because of NCAA rules and things like that, I’m not able to talk to coaches, I’m not able to talk to anybody at any other school except for the school I was at. And I didn’t talk to him (Riley) for a month, two months, whenever I hit the transfer portal between where he left and I hit the transfer portal,” Williams said. “So, I’m kind of getting the groove of things, kind of seeing how it felt with him being out here. Not talking to him for a while after him leaving, it was kind of weird being finally able to speak to him. But that was really it. Kind of seeing how things went.”

Ultimately, Williams ended up where everyone expected him to end up. He is playing with Riley at USC and has a lot of expectations to be great. The Trojans will hope to turn around a 4-8 season from a year ago and make the Pac-12 Championship right away. It’s not at all ridiculous to imagine that the Trojans could be in the College Football Playoff as soon as this year, but there is a long road ahead of them and a lot of ball left to play.