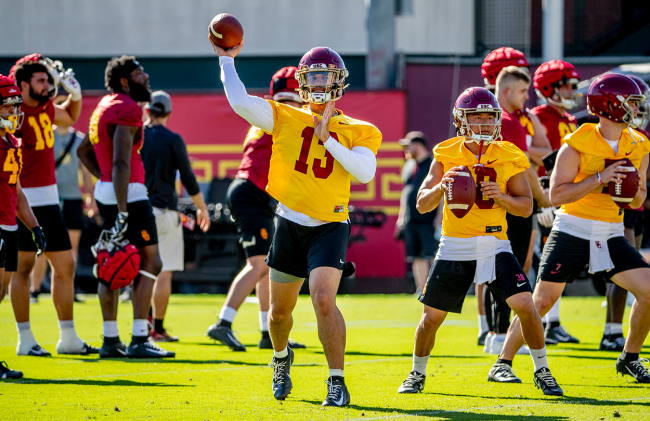 Former Oklahoma quarterback Caleb Williams is one of many college football players to transfer into USC after the school announced that it was hiring Lincoln Riley as its head coach. He has had nothing but positive things to say since his arrival and wants other players to know what his experience has been like.

In the age of the transfer portal, there are players who are available to be signed year-round. Now that spring practice is coming to a close and teams are able to evaluate their needs, there is set to be another big wave of transfers in the coming months.

As players who are in the transfer portal consider their options, Caleb Williams has a message about USC.

Williams wants them to know how things have gone for him and his teammates. The former five-star recruit and 2022 preseason Heisman Trophy candidate explained why the new culture at USC is so great under Lincoln Riley.

Basically, he gave a recruiting pitch to transfers without spelling it out exactly that way. Here is what he had to say after practice earlier this week:

“What’s here and the culture … 10 weeks ago, this culture is not what it is now. So having these guys here — obviously, we have guys coming in. But having these guys here, we’ve been working on this culture has been amazing because these are the guys we’re going to have to get to fill out our roster — because we know, if you go look at the roster, we’re down a lot of players.”

“We can’t push ’em away or push them out, anything like that. We have to accept ’em. They have to accept our culture and what we’ve built, and we’re going to chug along and win a bunch of games.”

Whether Williams and USC’s vision to “win a bunch of games” comes true or not is to be determined. However, should the Trojans continue to add high-profile transfers during the offseason, it’s hard to bet against them.