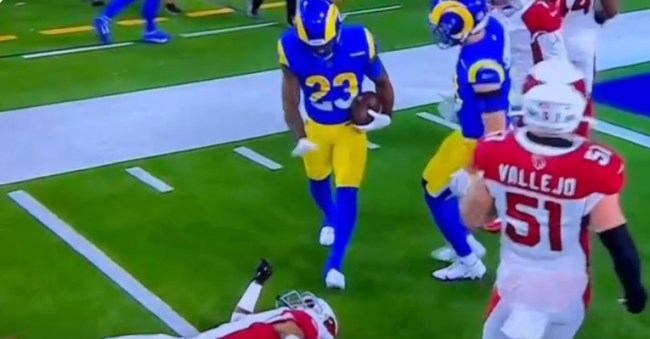 Cam Akers trended on Monday night because people were angry with him over an ill-timed celebration.

Late in the Rams-Cardinals playoff game, Cardinals’ safety Budda Baker was carted off the field after he was knocked out cold when he took a brutal hit to the head while trying to tackle Cam Akers.

After the play, Akers appeared to taunt Baker while he was unconscious on the ground.

Ah crap. Cam Akers didn’t knock Baker was out. And this pissed off Arizona, understandably 😬 pic.twitter.com/9OSvQy5QnN

Update: Akers apologized for the taunt on Twitter after the game.

Prays up to Budda 🙏🏾 . I didn’t know he was hurt after the play but I have nothing but respect for him .

Fans immediately noted that it was unlikely that Akers knew the severity of Baker’s injury at the time.

The NFL is fast, physical and intense but Cam Akers taunt over Budda Baker is not my idea of good football. I know he did not know the severity of injury. Rams fan here, but prayers up for Budda Baker, incredible player.

It looks shitty at the moment, but i don’t think Cam Akers knew he injured Budda Baker when he did the taunt… he did it right after the play, not when everyone knew Baker was gonna need to be put on a stretcher

I'm going to give Cam Akers the benefit of the doubt for being in an adrenaline rush after that hit.

But somebody from the Cardinals should've yolked him up for doing that "too small" taunt while Budda Baker laid there lifeless.