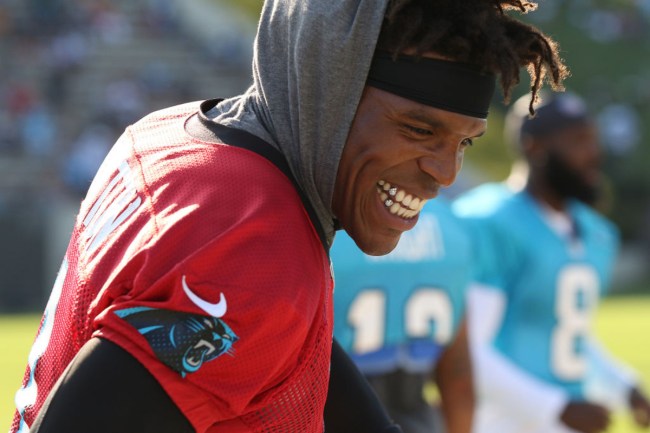 Thursday was a good day for Cam Newton. After an early report that he would be meeting the Panthers to discuss the possibility of returning to the Carolina organization, mere hours passed and he had signed a new deal with his former club.

The 2015 NFL MVP was released by the Patriots earlier this year and as various quarterbacks around the league started missing time due to injuries it felt like a matter of time before a team gave Newton another shot in the league.

With Sam Darnold expected to miss a month with a shoulder injury, the Panthers called Newton, someone they’re extremely familiar with as he played 9 seasons in Carolina earlier in his career.

Newton is of course very happy to be back in the league and with a franchise he knows so well. Plus, he secured quite the bag with his new deal, so it’s no surprise that he was all smiles when he arrived to practice on Friday.

Fans on social media had mixed reviews of seeing a 32-year-old Newton officially arriving onto the scene in Carolina on Friday. A lot of fans made note of how happy wide receiver Robby Anderson looks in the video as well.

I was trying to think if there was any other singular person on this planet who could effortlessly drum up this much energy in the city of Charlotte this morning and the only person who came close was maybe Babe Ruth coming back as a zombie. https://t.co/O7BN9BQaRe

Bruh, that ovation better be heard coast to coast! https://t.co/ISQBQaeOkL

You go out there and blast the HELL out of whatever you want to listen to today Cam. https://t.co/sGoWVsFbT2

This is like watching your friend break up with someone in a harsh way and then all of a sudden they’re back together acting like it didn’t happen… https://t.co/Oknf1mjjaF

Cam just fits this unit better than Darnold and Teddy ever did. Robby smile reached his ears 😂 https://t.co/wMXHE0sQWh