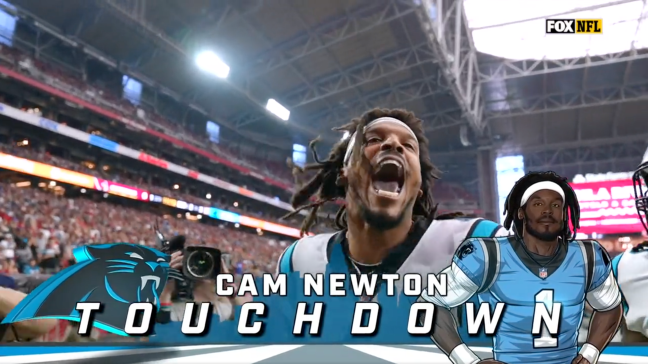 Cam Newton is back and he wants to let everybody know. However, his announcement came with a price.

Earlier this week, in a bizarre full-circle turn of events, the Panthers re-signed Cam Newton to their active roster after releasing him in March, 2020. Newton, who spent nine years with the Carolina organization, went on to sign with the Patriots last season.

Prior to the 2021 season, the former MVP was expected to receive an opportunity to continue as the starter in New England. However, after Mac Jones had a great offseason and Newton violated COVID-19 protocol, Jones was named QB1.

As a result of the decision, both parties agreed to part ways so that Newton could join a team that could provide an opportunity to play. That team, now his current, was also his former.

After Sam Darnold was ruled out for the season with injury, Carolina brought Newton back on a lucrative contract earlier this week. NFL fans were shocked by the potential value.

Despite the reaction to and appearance of the move, Newton was ready to go and released a hype video for his return. Three days later he was all of the way back.

Early in Sunday’s game against Arizona, for which P.J. Walker was technically the starter, Newton was tapped near the goal line. It was no secret what was about to happen, and the 32-year-old took a designed QB Power to the edge for six.

After the play, Newton ran to the crowd, took off his helmet and proclaimed “I’M BAAAAAACK! I’M BAAAAAACK!” in celebration.

CAM NEWTON IS BACK.

Although he was excited, because he removed his helmet, Newton was flagged for excessive celebration and called for unsportsmanlike conduct. Really?

No Fun League refs really flagged Cam Newton for yelling “I’m back” after his first TD of the season pic.twitter.com/fIF4zbJ7VP