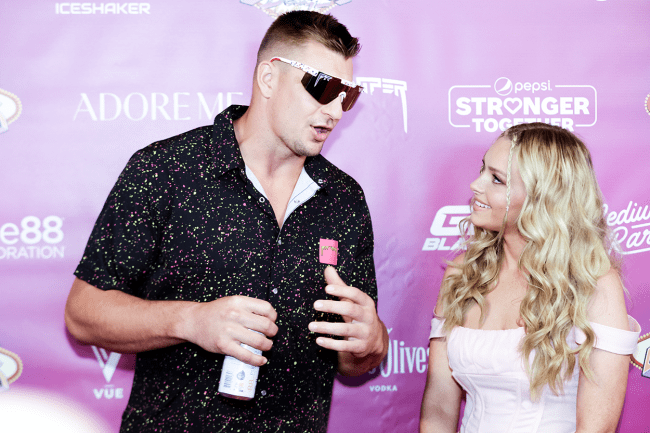 And as things currently stand, there is no answer.

Some NFL insiders think that Gronkowski is done. Some think that he will come back.

There is no telling what will happen. However, the person who is closest to the future Hall of Fame tight end would likely have some indication on what he may or may not decide, right? That person is probably his girlfriend, right?

Well, Camille Kostek has her thoughts and she is definitely not convinced that her boyfriend of seven years is done playing football.

During an exclusive interview with Sports Illustrated Swimsuit, she gave some insight into Gronkowski’s future in the NFL. From her perspective, at least.

“I am an honest lady, and honestly, in my heart, I didn’t feel like this one is a forever one. So, I think maybe he’ll come back again,” Kostek said during Miami Swim Week. “I feel like him and Tom are just having fun like, ‘Retired, not retired, retired, not retired.’”

While Kostek will support Gronkowski in whatever decision he makes about retirement, she has said before that she is looking forward to having some more time together.

During an interview with Extra, Kostek was asked what her post-NFL life with Gronkowski will look like.

“With the news of him kind of stepping away from football … I think we will be able to maybe explore … I mean enjoying time together and getting to know each other even more,” Kostek said. “The pandemic allowed us to get to know each other in that time. … Not on a schedule and having to be at the airport all the time.”

She also said that the two plan to travel together more.

“We actually just got back from France. … We were in Hawaii a couple months ago. … I hope I can bring him to the Virgin Islands — that’s where I shot for the magazine this year. I have family there; that’s where my mom grew up. He’s never been the years that we have been together. I hope that will be our tropical getaway … do it the local way.”

It will be interesting to see if Gronkowski’s extra time with Kostek and their travels sure-up his decision to stay off of the field or if he gets the itch. As of now, Kostek isn’t convinced that he’s done.