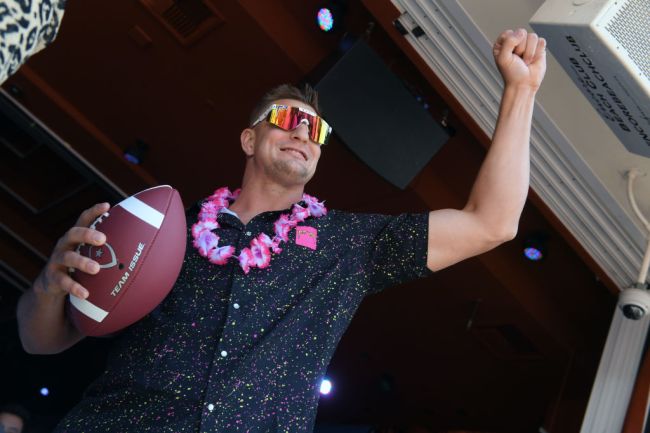 This offseason, Rob Gronkowski announced that he had taken his last snap on an NFL field. Despite the announcement, there are still plenty of football fans out there who expect to see Gronk back on the field at some point in the future.

It’s understandable for fans to be a bit skeptical about Gronk’s retirement. This isn’t the first time he’s retired. Gronk retired 3 years ago when he was still a member of the New England Patriots before returning a year later to once again team up with Tom Brady as a member of the Tampa Bay Buccaneers.

Brady himself has also created skepticism among fans about retirement announcements after retiring back in February just to change his mind in March.

Despite the lack of belief from fans, Gronk told ESPN’s Mike Reiss that this retirement will stick even if he gets a call from Tom Brady.

Let the record state, Rob Gronkowski will stay retired even if Tom Brady calls him this time around 😅

“I would answer obviously. I would obviously answer the greatest quarterback of all time and ask him how he’s doing and tell him I’m doing good, but I wouldn’t go back to football.”

Gronk made it clear that he has other things he wants to pursue now that his football career is over.

“I’m done with football. Love the game. Love the game. And definitely blessed with all the opportunities the game of football has given me and the relationships I’ve made — obviously, here in New England for nine seasons and two down in Tampa for two. But I’m done with football and stepping my feet into the business world, business ventures, and just seeing what’s out there and where I can find my place.”

Gronk has dealt with a ton of injury issues with his career and it’s very believable that he just doesn’t want to continue putting his body on the line. It’s not like he has anything left to prove in the NFL.

Gronk has established himself as one of the best tight ends to ever play the game, posted 9286 yards and 92 touchdowns in his career, and won 4 Super Bowls.

Now it seems he’ll move on to trying to see if he can be just as dominant in the business world.