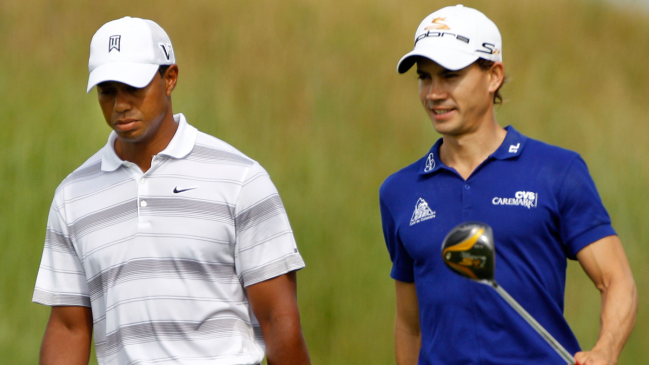 Most professional golfers who’ve gotten the chance to spend some time with Tiger Woods have at least one anecdote they can spend the rest of their life pulling out in any situation where they have the chance to deploy an incredibly formidable humblebrag.

John Daly is a member of the fairly exclusive group of people who can say they figured out a way to mess with the mind of the legendary golfer who’s known for being a master of psychological warfare both on and off of the course. With that said, being able to say you fell victim to Tiger’s impressive bag of mental tricks is way cooler than not having a Tiger Story at all.

Camilo Villegas is one of the many pros who’s more than happy to admit he may have gotten outfoxed by Tiger, as the Colombian who made his PGA Tour debut in 2004 recently recounted the anxiety-inducing (and retroactively hilarious) ordeal he was forced to endure after getting the opportunity of a lifetime in 2008.

Villegas went out of his way to share the story during a recent appearance on the Subpar podcast, where he recalled the time he was offered a seat on Woods’ private jet after he had trouble finding a flight that would allow him to get from a skins game in Thailand to an event in Australia in a timely manner.

Camilo Villegas shared a hilarious story with @ColtKnost and @thesleezyman about a wine disaster on Tiger Woods' private jet on a recent episode of @golf_subpar.

While he had planned to sleep on the flight after winning the first competition, he said Tiger strongly encouraged him to celebrate with the red wine he ordered prior to takeoff. Unfortunately, he neglected to make sure it was secure when the jet left the ground, which led to the glass shattering and splattering wine all over the interior of the plane.

While the flight attendants offered to clean it up, Villegas insisted on trying to take care of it himself. However, that was easier said than done, and he spent around 40 minutes trying (and failing) to make much progress before telling Woods, “Bro, just send this thing to get cleaned and send me the bill.”

Tiger did exactly that a few months later, as Villegas found an envelope in his locker at Sherwood Country Club containing an invoice to the tune of $25,000. While he admitted he knew there was a chance Woods was messing with him, he decided to bite the bullet and fork over the cash—although he couldn’t stop himself from having a bit of fun after Woods failed to acknowledge the payment had gone through:

“I don’t know how in the world I came up with this, but I look at Tiger and I said, ‘Hey, T, I got that invoice in the locker and I’m having some problems.’ He goes, ‘What do you mean?’

I said, ‘Yeah man, I couldn’t transfer the funds. I finally picked up the phone and called this lady at your bank, and I said, ‘Listen, I need to transfer $25,000 to this bank account.’ And the lady goes, ‘Sorry, Camilo, that bank account is full. You can’t fit a penny in there.’’

And I just see Tiger’s face. Honestly, to this day I don’t know if he thought it was funny…that was the last time I was on that plane.”

Villegas didn’t say if the money actually ever changed hands, but at least he can laugh about it now.