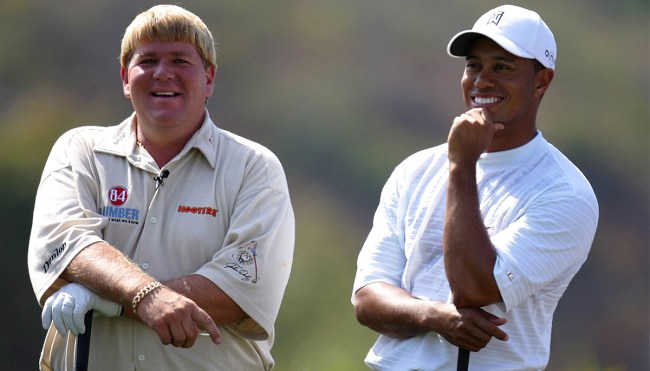 John Daly is one of the most entertaining characters to ever be featured on the PGA Tour, and the hard-partying golfer is at the center of some truly amazing stories that usually revolve around the consumption of significant amounts of booze.

That’s the case with the anecdote Daily shared all the way back in 2016 concerning the time he tried to convince Tiger Woods to sit down for a beer when the two men were competing at what was then known as the Target World Challenge back in 2004:

It was during the 2004 Target World Challenge and Daly had just completed the Wednesday pro-am with some friends and was in the clubhouse drinking and telling stories when Tiger Woods walked into the room.

“Tiger’s there in his workout clothes and I said, ‘Tiger, come have a beer with us, man,’” Daly recalls.

Woods declined, explaining that he was bound for the gym and one of his ubiquitous workout sessions. Daly persisted, “I go, ‘Man, you don’t need to work out. You need to drink a little bit with us.’”

Woods’ answer is the stuff of legend.

“He said, ‘If I had your talent I’d be doing the same thing you’re doing,’” Daly says. “I’m looking at him thinking ‘You’re crazy, man.’”

However, it turns out there was more to that tale, as Daly elaborated on what unfolded after Tiger turned him down last year on a podcast appearance that’s started to make the rounds for reasons that should be very evident when you hear what he had to say.

Daly said he’d made his way through three bottles of Crown Royal by the time Woods got back from the gym and that Tiger told a crowd of sponsors he was “probably going to kick his ass” when they took to the course the following day.

However, that didn’t turn out to be the case, and Daly seized on the opportunity to mess with his playing partner when they faced off:

“I go out the next day. I shoot 65 and beat him by like six shots. It was about the last time I ever beat him. He is looking at me the whole day.

I got drinks coming down, people bringing me drinks on the golf course—I was just making him think they were drinks. They were just Diet Cokes…I got him thinking I was really still drinking. He was so pissed.”