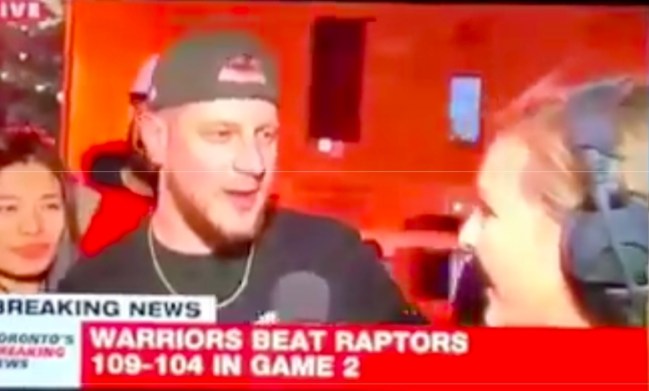 If you look at a map and squint really hard, you may mistake Canada for North Korea.

The Toronto Police Service has reportedly ARRESTED the drunk dude who said Toronto was going to “f*ck Ayesha Curry right in the p*ssy” on live television.

According to TMZ, 28-year-old Tristan Warkentin, a salesman from Ottawa, was arrested for criminal mischief since he knew his comments would air on live TV. A court date has reportedly been set for July 11.

The arrest comes after Warkentin expressed his sincere shame for what occurred and claimed that he was so drunk that he doesn’t even remember being there.

“I’m not in a position to defend myself in terms of what happened. I am sure you understand the influence of alcohol,”  the salesman from Ottawa told the Toronto Sun. “What I did was disgraceful; it was an alcohol-influenced situation.”

“What I am trying to do is maybe reach out to Mr. and Mrs. Curry and that’s realistically who I feel I owe an apology to – and maybe Toronto,” he added.

“To be honest I don’t even remember being there but I am responsible for my own actions at the end of the day,” he told me. “I am not sitting here claiming victim.”

He continued by taking solace in the fact that although the blowback from the incident has been overwhelming, criminal action is off the table. Given the recent developments, this quote is very ironic.

“Realistically at the end of the day there is not going to be any trouble other than the backlash and the repercussions of my actions,” he concluded. “There (are) no criminal charges that can be laid because of what happened. Does that make it any less wrong? Absolutely not.”

Warkentin claims to be receiving death threats from his comments. Couple those with his face being plastered all over social media and a criminal mischief arrest, its safe to say that Tristan is having a tough week.

The arrest is a bit over-the-top, Canada. If we arrested everyone who did this in America, our prisons would be stacked to the ceilings.