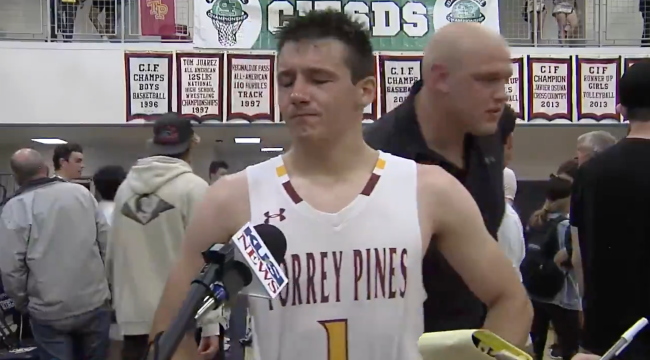 Hollywood couldn’t write it any better. Less than three years ago, Nick Herrmann was told that he could never play basketball again. On Saturday, he hit a buzzer-beater to win the CIF San Diego Section championship.

HOLLYWOOD COULDN’T WRITE A STORY BETTER THAN THIS!!

After all that he’s been through…

Herrmann, a senior at Torrey Pines High School in San Diego, California, was diagnosed with a cancerous tumor, known as osteosarcoma, in his left leg. Doctors told him that he would never take the court again. He was told that he might lose his leg.

The diagnosis came in September 2018 and Herrmann set out to prove the experts wrong. After 70 days in the hospital, a year away from school and four surgeries, he had to learn how to run all over again. He did.

Then he had to to relearn how to play basketball. He did.

After working his way back to the court, Herrmann reclassified as a junior and averaged 10.4 points, 2.9 rebounds and 2.8 assists. As a senior this year, he helped lead the Falcons to an undefeated regular season record.

Had the story ended there, it would have been a remarkable comeback for a resilient young man. But it didn’t.

With only one half-second remaining, Torrey Pines was tied at 60 with Cathedral Catholic. The winner would advance to the California State Championship bracket, the loser would have its season come to a close.

Herrmann got open, caught the inbound pass and threw up a three-pointer from near half court. He drained it and beat the buzzer. Pandemonium.

WHAT A FREAKING HIGH SCHOOL BASKETBALL GAME. Nick Herrmann wins it for Torrey Pines at the buzzer, 63-60. pic.twitter.com/cCgFGUj4Yr

After the game, in his postgame interview, the emotions were heavy and it will give you chills.

From a person who beat cancer to the @TPHS_Basketball star who beat the shot clock. @NickHerrmann25 emotions are just as big as the game-winning shot! pic.twitter.com/pUhqJygRbE

Nobody deserves such an incredible moment more than Herrmann. He worked so hard to get back on the court and it made for one of the best stories of 2021.