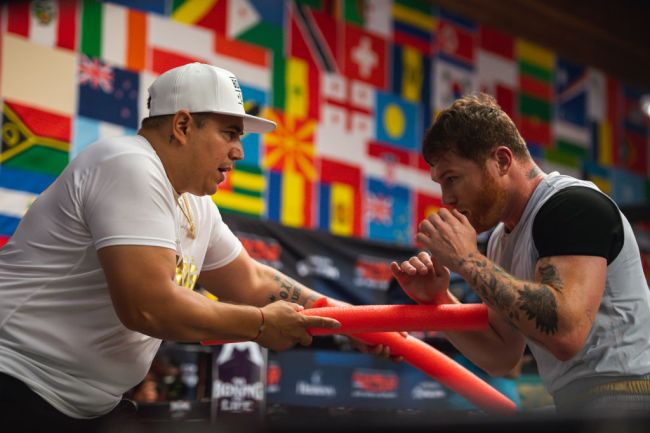 On November 6th, Saul “Canelo” Álvarez will attempt to make history by becoming the first Mexican-born undisputed champion in boxing history when he faces Caleb Plant on Showtime PPV.

Before the fight, we were able to sit down with Canelo’s right-hand man, trainer Eddy Reynoso, courtesy of Hennessy, and he talked to us about Canelo’s altercation with Plant at a pre-fight press conference, the boxer’s relationship with up-and-coming star Ryan Garcia, and Alvarez’s drive to become the best ever.

Canelo, who is currently the spokesman for Hennessy, lives by the company’s “Never Stop. Never Settle” mantra when he steps into the ring and strives to become the greatest boxer of all time, according to Reynoso.

“We’ve had to work 17 years to get to this fight. What’s going to happen on November 6th when Saul wins the fight, it’s going to be the biggest thing that’s happened in Mexican boxing because there’s never been a Latin boxer who has ever won the four belts, including the Ring belt. I think it’s going to be historic, it’s going to be very difficult for anyone to accomplish; hopefully, someday, another Mexican/latino will accomplish it one day. It’s something that’s extremely important for Saul’s career and mine as well.”

During the fight’s initial press conference back in October, Alvarez got heated and shoved Plant during their face-off.

We asked Reynoso about the altercation, and while he understands why Canelo went after Plant, he’s going to talk to his boxer to make sure he doesn’t lose his cool in the ring during the fight.

“No, the truth is that I’ve been calm in that aspect, I don’t like that my boxers are involved in that type of conflict, especially when it’s at a press conference or at the weigh-ins because you can ruin a fight that you’ve been getting ready for 3-4 months by a punch thrown. I don’t like those types of things, but in reality, there wasn’t any other solution, they’ve been talking a lot, saying offensive stuff, and when they got face to face, they started saying worse things to each other. That’s when Saul lost it, but yes, it’s going to be a very contentious fight.

“One can be very concentrated and not fall into those types of provocations, but in the moment is very hard to control yourself. I personally have never liked not even on Twitter posting offensive things. I think that’s something that we’re going to have to talk about round by round, especially now that we’re going to be going to the next press conference and weigh-in, I’m going to be very cautious in those aspects.”

Another big story leading up the fight revolves around Canelo criticizing Ryan Garcia’s dedication during an interview with Complex.

Canelo wants Ryan Garcia to be more focused in the gym and more active in the ring. pic.twitter.com/vPSlGwyROw

Reynoso, who trains both fighters, says Canelo often gives Garcia advice, and the relationship between the two fighters is still very good.

“First of all, the relationship between Canelo and Ryan Garcia is very good. Ryan Garcia comes here to box and to train, and Saul corrects on some things that he’s doing wrong, he advises him on his boxing technique, but look when someone criticizes you…and if that person is successful like Saul, who is the best boxer in the world, I would take that as a compliment. Now it depends on how each person takes it individually, but in the end, the only thing Saul said was in response to a question about what he sees in the gym.”

Finally, Reynoso gives us his prediction for the Canelo-Plant fight.

“We’re going to win this fight by knockout. We’re prepared for all aspects of the fight, I’ve never liked to be arrogant, but this fight has to be won decisively by decision or knock out but I believe it’s going to be a knockout”