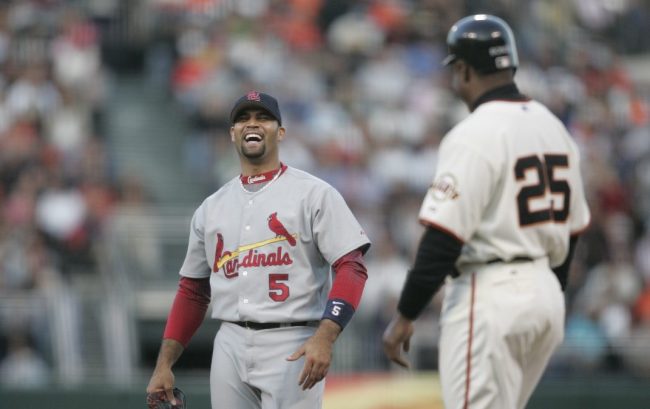 This might be the final year of Albert Pujols’ career and he’s making sure his name is etched in the history books. Not only did he help the St. Louis Cardinals defeat the Colorado Rockies, but he made franchise history. Additionally, the future Hall of Famer is nearing a unique Barry Bonds record.

Pujols went off against the Rockies on Wednesday night after recording four hits, two runs, and two RBIs. The Cardinals’ star veteran also hit one out of the park giving St. Louis the spark they needed to win. According to ESPN Stats & Info, the home run was the 687th of his career. Simultaneously, he hit it off the 448th different pitcher in his career. That specific stat is now just one shy from the great Barry Bonds.

Albert Pujols hit the 687th home run of his career last night off of the 448th different pitcher he's faced, 1 shy of tying Barry Bonds for most pitchers homered against in MLB history.

He also had 4 hits, becoming the oldest player in Cardinals history to record a 4-hit game. pic.twitter.com/O7PWauow6b

At the same time, the four hits Albert Pujols recorded made him the oldest player in Cardinals history to have a four-hit game. Although he’s not the same player he used to be, the future Hall of Famer is still making noise for St. Louis. His bat is still dangerous, as he’s been a rather consistent hitter throughout the season.

Any time someone can compare themselves to Barry Bonds is a massive success. Look for Pujols to potentially break Bonds’ record this year. The Cardinals have just under 70 games remaining on the schedule as of this publishing. There is plenty of time for Albert Pujols to surpass Barry Bonds. He just needs to hit two more home runs off of two different pitchers he’s never homered on before. Easy, right?