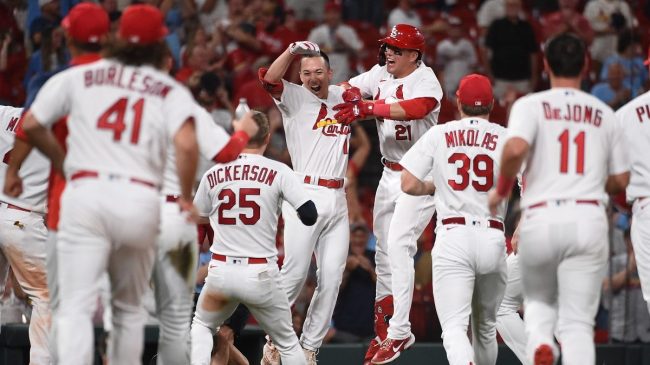 The MLB regular season is nearly over and the St. Louis Cardinals are one of the best teams in the league. They’re currently in first place and should be making the playoffs this year. However, late Wednesday night, the team capped off a comeback victory over the Washington Nationals and it was the biggest of the year.

Cardinals Scores 5 Runs To Comeback Against The Nationals

According to The Athletic, the Cardinals are “the first team this season to win a game in which they trailed by four or more runs entering the bottom of the ninth inning.” It was a crazy game as everyone thought St. Louis was dead in the water. Instead, they score five runs to steal the victory away from the Nationals.

The St. Louis Cardinals are the first team this season to win a game in which they trailed by four or more runs entering the bottom of the ninth inning.

All teams in MLB combined were 0-817 in such games this season.

The Athletic shared a clip of the walk-off run that allowed the Cardinals to complete their comeback. However, the bottom of the ninth was so bizarre, you deserve to see every single run.

Here are all the runs from the Cardinals insane ninth inning comeback. Enjoy. pic.twitter.com/bnlPNEQtKa

Comeback victories like these are the stuff players and fans dream about. Additionally, this win symbolizes how their season has gone all year. St. Louis didn’t have the hottest start, but they’ve been strong in making their playoff push. Meanwhile, the Nationals absolutely collapsed late in the game, as they’ve largely struggled all year.

We’ll see how the rest of the MLB season plays out, but the Cardinals seem to have a comfortable lead on their division. Look for them to remain hot as they enter the postseason and potentially make a long run.