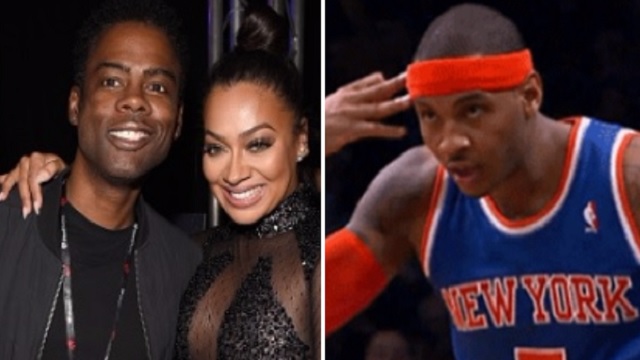 During his appearance on the Wendy Williams show, the comedian, who is a prominent Knicks fan, gushed about how good Melo’s estranged wife was looking after she separated from her husband.

‘If La La is interested in going short next time,’ Chris began. ‘La La is bad, woo! Hey, they’re married; you’re not supposed to mess with other team’s players. But she’s hot though!’
‘She looked great the other night,’ Chris continued, speaking about a photo of La La at the Met Gala in New York City. ‘La La will you? La La let’s go to ‘La La Land!”

According the Daily Mail. Melo was pissed at Rock and wants him to stay away from his wife. The Knicks star allegedly went to the extreme of calling Spike Lee to tell Rock to back off.

He was really upset,’ a source close to the player told DailyMail.com.
‘He sent a text to several of his friends asking “Did y’all see this bulls**t? This n**** on TV trying to scoop up my wife.”
‘He then called famed film director Spike Lee to tell him to tell Chris to back off before it became a problem,’ the source added.

But La La was flattered by Chris’s flirting. The actress told friends she was very tempted to post the clip on her Instagram with three heart emojis as a caption.

She felt like Carmelo needs to realize that just because he didn’t respect his marriage vows doesn’t mean someone else doesn’t want her. The only reason she didn’t post the clip is because she knew it would fuel more headlines about their split,’ the source revealed.

Two of La La’s closest friends are encouraging her take Chris up on his offer. DailyMail.com is told best friends Kim Kardashian and Ciara have both been pushing their friend to quietly go out with Chris.