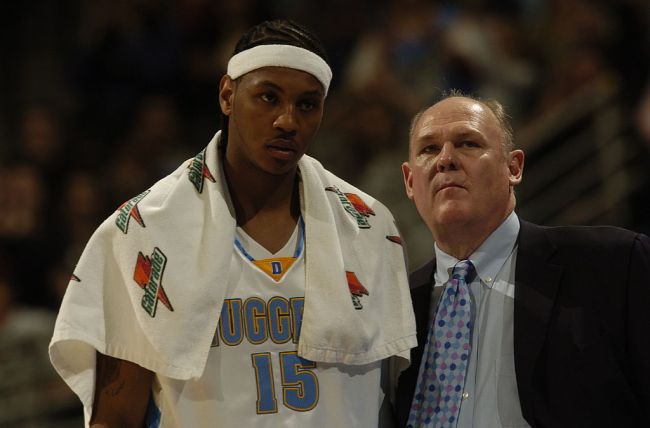 Outside of the Buffalo Bills losing four straight Super Bowls and Michael Jordan’s pushoff spoiling the Utah Jazz’s first title hope, the mid 2000s Denver Nuggets team may be the franchise on the cusp still plagued by What Ifs.

George Karl, who was awarded NBA Coach of the Year shortly after trading Carmelo to the Knicks, has come under fire from Melo Truthers who are irate the former NBA coach said something everyone already knew.

In response to the newly-minted Lakers’ comments about his failure to win a championship keeping him up at night, Karl threw an innocent-enough zinger at his former player.

And it kept our coaching staff up at night a decade ago when we were stressing the importance of team play and defense! 😆 https://t.co/riomQd667N

And then doubled down.

Jawn, Cmon man. It’s all Fun and hoops. I said Melo was a shitty defender and ball hog when he played for me. That isn’t news. Move on.

I’ve said it before – one of the great scorers the game has ever seen. He’s a HOFer and his Jersey should hang in Denver.

He Wasn’t a team first player or good defender here in Denver. And it upset us when he asked for a trade especially after I was sick.

And so it is!! https://t.co/ZQFUWWraXj

One is a team guy and winner

Karl may have flown a bit too close to the sun. Melo stans harbor the anger of never winning shit.

I think at least 100 people told me on here to die or rot in hell in the past 24 hours.

Lighten up and celebrate life!! 👍

On CBS Sports’ Tiki & Tierney, Karl acknowledged that Melo helped “turn the franchise” around in Denver before doubling down on his criticism.

“He’s a powerful player. But he’s an individualist, and he likes to score more than he likes to play defense.”

Karl goes on to say that in many ways the Denver coaching staff “failed” to motivate Carmelo to understand that he is “good enough to win championships.”

"Melo was a great player, but he was an individualist… so I just poked the bear a little bit. I did stir the pot this time. I don't want to ever want to go down a negative road and maybe I did this time."@CoachKarl22 on his tweet shading #Melohttps://t.co/fqUQcWjKTE pic.twitter.com/wREP39ueZM

Carmelo has yet to comment on Karl’s comments because he’s incapable of even defending himself. Boom roasted.