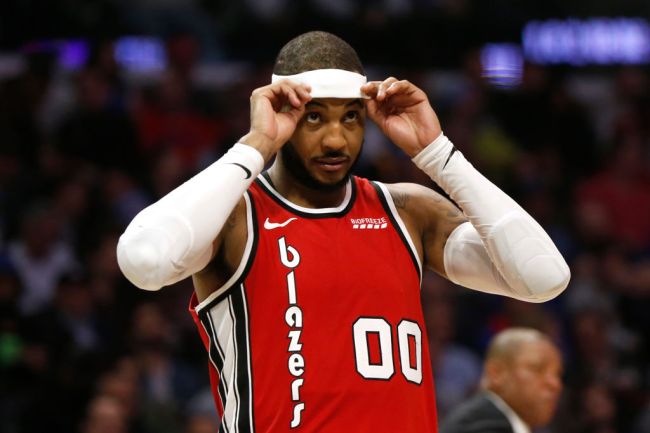 Carmelo Anthony is getting divorced from his wife of 11 years LaLa Anthony and it could be because he’s involved in another scandal.

On Thursday afternoon, PEOPLE magazine reported that LaLa Anthony was filing her divorce papers after ending her relationship with Melo due to “irreconcilable differences”

Not long after LaLa’s announcement, a woman came forward and spoke with Hollywood Unlocked to allege that Carmelo had impregnated after he had reconciled with his wife. The woman went on to reveal that Carmelo flew her out to London to keep the relationship secret after she got pregnant but then ghosted her as soon as the babies were born.

“To avoid controversy, they both agreed for her to fly out to London to have the babies with the agreement that he would come out there and visit when his season was over.

To note, the woman said as the two were figuring out what they were going to do, Carmelo suggested making the babies British citizens. She said she figured he would say that because it’s hard to update the birth certificates, and knew she would eventually want his last name on it. She said she went ahead and did so, but quickly reversed it because she knew it was the wrong move..

The babies were born in April, prematurely as they came out two months early! Sadly, they are still in the hospital as they have to remain there until her due date, which was scheduled for mid-June. (This is common for premature babies). However, the woman shared that her son developed problems with his brain and lacked oxygen, so he needed surgery.

The surgery happened earlier this month, and she tried to contact Carmelo as doctors told the woman her son was not waking up. However, she alleged that Carmelo never answered.

According to the woman, she decided to speak out about her relationship with Anthony because she wants him to be a part of the babies’ lives.

As for her reason for speaking out now, she says she realized she’s been “living a whole lie” and it’s been eating her up inside. She has not told her family or close friends about her kids and even previously denied pregnancy rumors to protect Carmelo and his family.

Although he has provided a place and some money, she said that’s not enough for her kids who need to know who their dad is. “I’ve seen my wrong in the situation and I should’ve never let this get this far, but I don’t want my kids to suffer.” She even noted that she’s open to speaking with LaLa, but doubt she would give her the opportunity to talk things over.

It is worth noting that Carmelo and his wife LaLa had previously separated for almost two years after Carmelo allegedly got a stripper pregnant. The two would reconcile in 2019 prior to their divorce this week.