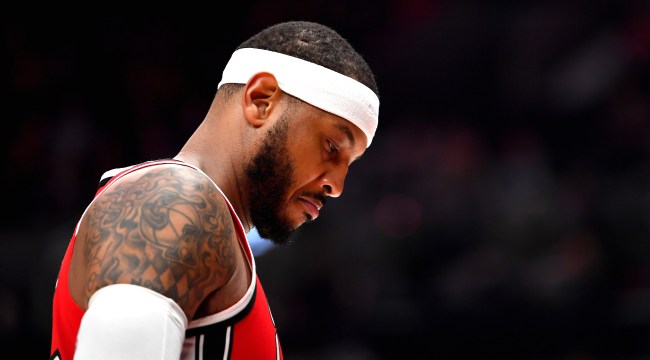 For several months after signing a veterans minimum contract then being benched by the Rockets after just 10 games in November of 2018 it looked like it was the end for Carmelo Anthony.

He was eventually traded to the Bulls, but was released 10 days later without ever suiting up for Chicago.

“I hit rock bottom emotionally, and I had to build myself back up, basically by myself, to get here where I’m at today to be able to tell this story,” the 35-year-old NBA legend admitted on Uninterrupted this week.

Anthony, who led the NBA in scoring at 28.7 ppg in 2013 with the Knicks, could have just walked away and waited for his inevitable election to the Hall of Fame, but he didn’t.

“If I ever write a book, this chapter would be highlighted,” said Anthony. “I mean, you gotta think, and I’m just gonna give a full-year span in a quick sense.

“I go from New York, making the All-Star Game, averaging 23, 22, 23 in the Eastern Conference, everything that I was dealing with off the court, organizational structure, just everything I was dealing with in New York. You guys, know that. Getting traded the day before media day to OKC. Going to OKC, actually really liking it, didn’t work out for whatever reason, to going to Houston the following year, to playing 9 [he actually appeared in 10] games. The first time I’ve ever come off the bench in 15 years. Ever. To come off the bench. So that was an adjustment for me. Leading to having a year off. Right? A year off of trying to rebuild myself mentally, emotionally, spiritually.”

Anthony added that he reached out to LeBron James during this time and that Kobe Bryant “helped me tremendously.”

“Being able to come out now on the other side… stepping away from the game and being able to come back, nobody has ever did that but MJ,” Anthony continued. “And seeing it from a different perspective, right, your mindset, how you approach the game now, how you approach organizational instruction, being smarter, being wiser, but I couldn’t have did that if I didn’t work on me within that time frame. And if I didn’t work on me during that time frame I wouldn’t be able to sit and talk about that story. And for me this season, like now is just like this… exhale… like damn, okay, I came back, I’m starting to do my thing and just, sh*t, we got to deal with [the NBA shutdown]?”