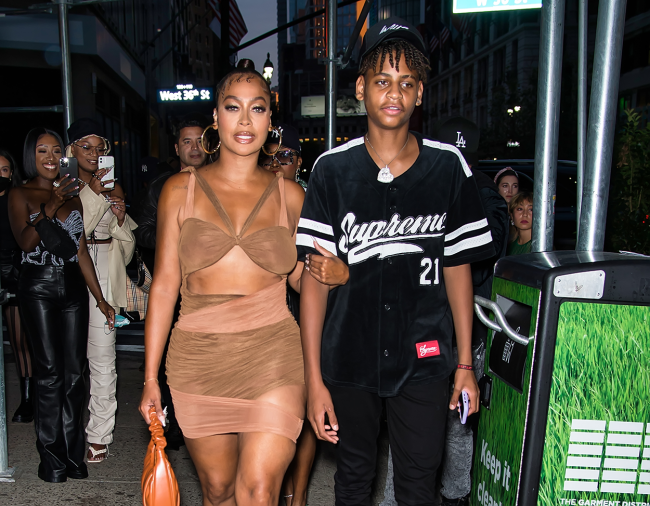 Carmelo Anthony’s son Kiyan is only 15 years old, but he is already a problem on the hardwood. After growing up as the son of a future NBA Hall of Famer, there will be a lot of expectations placed on Kiyan. It appears as though he will meet or exceed the hype.

As a top-25 recruit in the Class of 2025, Kiyan Anthony plays point guard and plays it well.

He stands about 6-foot-2, 170 pounds and has a lot of time to add weight and height to his frame.

In February of 2021, it was announced that Kiyan would be playing his high school ball at Christ the King in Queens, New York. To make the decision public, Carmelo posted a lit commitment video that showed his son hooping as a child.

Never thought this day would come so soon! Next chapter. Proud of you. pic.twitter.com/qzxrwWcqnF

Now, Kiyan is finishing his freshman year at the historic school. Christ the King has won four New York State Federation championships and six of the last 10 CHSAA Intersectional titles, and has produced multiple NBA players.

In addition, Christ the King is one of the few Team LeBron James Nike schools in the nation. Kiyan’s freshman year was impressive.

Now, in the offseason, Kiyan is hooping for his father’s Team Melo team of the Nike Elite Youth Basketball League. His highlight tape recently went viral and although there are undeniable differences in their play, Kiyan shoots like Carmelo. They have a very similar style in their play and Kiyan is smart in his movement and a fantastic isolation scorer, able to create space and opportunities that only come from having a natural feel for the game.

Regardless of how they look on the court, Kiyan gets buckets just like his old man.

Carmelo’s son Kiyan is a BUCKET just like his pops 🔥 @carmeloanthony pic.twitter.com/QrKyLq3rdq

There is a lot of time left to figure out Kiyan’s future, but it will be interesting to see which route he chooses after high school. Will he follow his dad to Syracuse? Will he go to college elsewhere? Or will he go the Overtime Elite or G-League route?