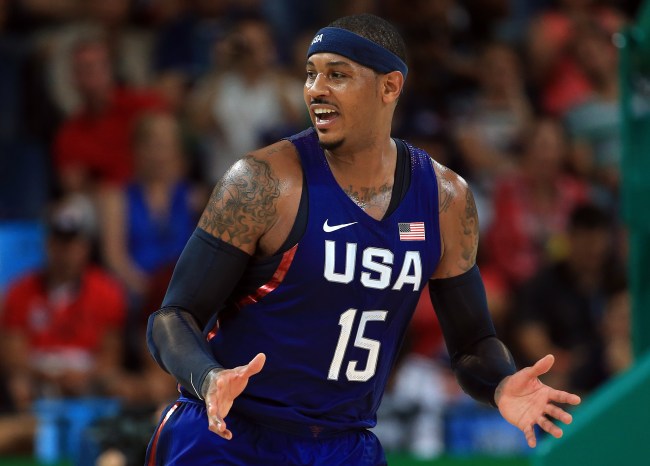 For the past few weeks, Carmelo Anthony has made it known that he wants to play basketball again after sitting out most of last season.

Here is Melo telling Stephen A. Smith that he’s reached out to a number of teams about a potential return.

Melo says he reached out to the Lakers, Clippers….doesn't want a retirement tour..just wants to play basketball pic.twitter.com/ijrsz8ilP1

Melo even reached out to Team USA but USA basketball managing director Jerry Colangelo didn’t think it was a good idea because he believes Melo’s situation could become a distraction.

Via Chris Mannix of Sports Illustrated

I love Carmelo,” “He made a great contribution. He was a very good international player. But for where we are and what we’re doing, that conceivably could have been a distraction. I understand why the request was made. He’s trying to reestablish himself. I think that has to be done in the [NBA].”

While Melo won’t be playing on Team USA former NBA player Brian Scalabrine believes the Miami Heat will probably offer him a roster spot before the season.

“Miami has four roster spots, and they got a lot of guys on low guarantees,” Scalabrine said. “Right there, there’s a need now. If they want to do the development thing with young guys, I get it.

“But that’s really not Miami’s forte. They like taking guys, like a older guy, Carmelo Anthony, and say, ‘With our good culture we’re going to turn him into what we feel like.’ So I think Miami is interesting and because they’re laying in the weeds. If you haven’t heard talk about it, I actually think that there’s some traction there.”

Let’s hope someone gives Melo another shot because it’s kind of depressing watching a great player like him beg for a job in the NBA.