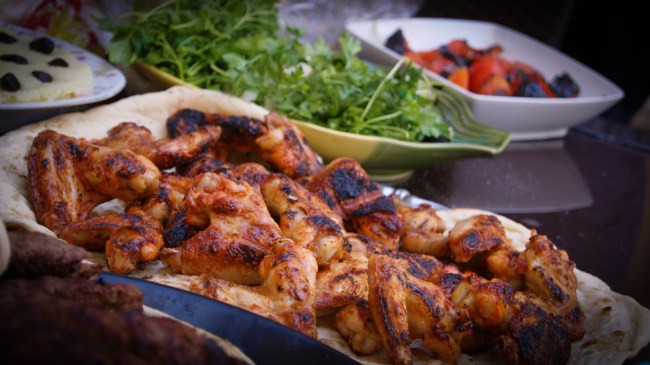 If you’ve been to a sporting event lately, you know damn well that a beer will cost you about $12, a slice of ‘za’s around $8 and even something as cheap as a hot dog is about $6. In the words of Vince Lombardi, “what the hell’s going on out here?” When you add up the cost of actually attending a game in person, including your ticket, it’s basically around $150, which, is absolutely absurd.

Well, one Carolina Panthers fan wanted to take a stand against such high prices in sports stadiums, which may just inspire other people to do something similar, because the dude is genius!

Packing a backpack full of Bojangles chicken, this dude just became an icon by giving a big F you to the ridiculous food costs, which people all around the Internet just loved. Check out his little mobile meal.

My friend refused to pay for Bojangles inside the stadium so he came up with a plan b. #WelcomeToTheSouth pic.twitter.com/cIfr1ZDBhV

While the intention was brilliant — as was the execution — his appetite got the best of him before he could actually make it into the stadium, however, as it turned out the guy stuffed his big ol’ belly with that crispy chicken before walking through the turnstiles.

He’s a big boy, that chicken didn’t a chance. Was gone before we got to the stadium

Hey, it’s the effort that counts, so respect for at least (brilliantly) coming up with a plan that I’m guessing plenty of other drunk sports fans will try. Sh*t, if you don’t think I’ll be doing this the next game I go to, you’re underestimating my cheapness. It’s why I sneak a flask into every game I go to, obviously.

Anyway, while the guy didn’t make it into the stadium, plenty of reactions around the Internet were still praising him. Take a look at a few here.

He could have claimed it was his therapy animal

I think you could make a legit case for an emotional support chicken.. especially if it’s @Bojangles1977 👍

I work security at BOA and I would maybe turn a blind eye if you left some support biscuits on the table while going through security.

run that man for office

Big ups, big man. Here’s to your hangriness not getting in the way from you enjoying that chicken in some cozy plastic seat next weekend when you go to the game.